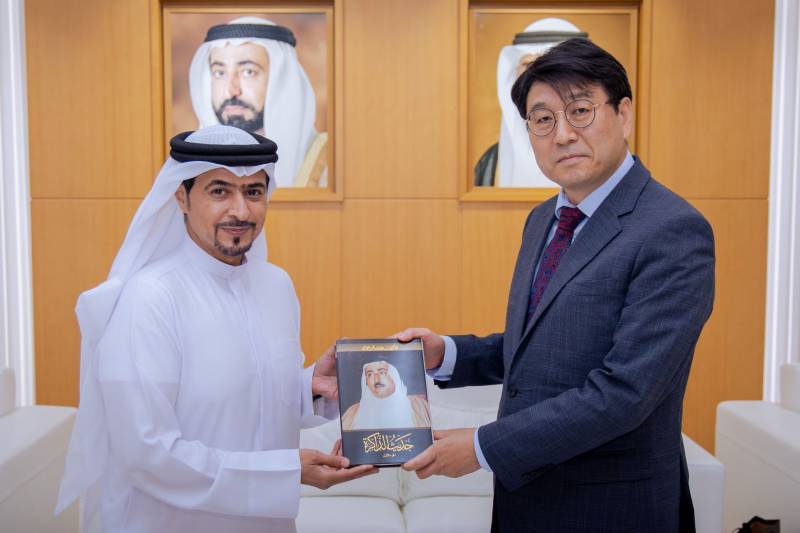 SHARJAH - HE Ahmed Al Ameri, Chairman of Sharjah Book Authority (SBA), recently received HE Moon Byung-Jun, Consul General of the Republic of Korea in Dubai, at SBA’s headquarters for a meeting to look into future prospects to strengthen Sharjah’s friendship with South Korean cities by increasing avenues of cultural collaborations between the two.

HE Al Ameri also took the opportunity to present Sharjah’s Guest of Honour programme at Seoul International Book Fair in 2023, detailing SBA’s preparations for a comprehensive and vibrant cultural agenda they will bring to the prestigious International cultural event in order to share the emirate’s cultural project in South Korea as well as promote Emirati and Arab culture to Korean and Asian audiences at the event.

The two parties discussed the scope of cooperation and expertise exchange required to elevate the book industry and its key functions including marketing, coordinating translation projects between SBA and counterpart entities in South Korea, and more. Bringing South Korean and Arab publishers as well as creative publishing experts together by creating networking opportunities through participation in book fairs and other key publishing events was also discussed.

Al Ameri informed the Korean diplomat about SBA’s leading offerings and initiatives that boost the UAE’s and the region’s creative and cultural output, while also highlighting key projects of the Authority, namely, the Sharjah International Book Fair (SIBF), Sharjah Children’s Reading Festival (SCRF), and the SIBF Publishing Conference, which supports these endeavours and also contributes to the industry’s development by enabling businesses to explore new markets and opportunities across these events and platforms.

“South Korea has a magnificent history and cultural legacy, and at SBA, we are pleased to reinforce Sharjah’s cultural communication with the nation by looking into ways we can forge new, fruitful relationships between creatives, bookmakers and publishers in UAE and the region and their Korean counterparts. At SBA, we work dedicatedly to realise the vision of HH Sheikh Dr Sultan bin Muhammad Al Qasimi, Supreme Council Member and Ruler of Sharjah, to enhance cultural collaboration with like-minded nations around the world,” Al Ameri remarked.

“This important visit is symbolic of the continuity in our close relationship with South Korea, one that Sharjah started forging decades ago being the sole representative of Arab culture at Seoul International Book Fair. At the same time, SIBF has been a key platform that has enabled the Korean publishing industry to communicate with the Arab world,” he added.

For his part, HE Moon Byung-Jun, Consul General of the Republic of Korea in Dubai, underscored that South Korea has enjoyed close relations with Sharjah for decades, which are further strengthened as the emirate continues to realise its vision and role in opening new horizons for communication and dialogue with world civilisations and cultures.

HE added: “We are pleased to host Sharjah as the Guest of Honour at the Seoul International Book Fair 2023, and we believe that this participation will be a significant step forward and a huge opportunity to boost relations with Arab culture through Sharjah.”