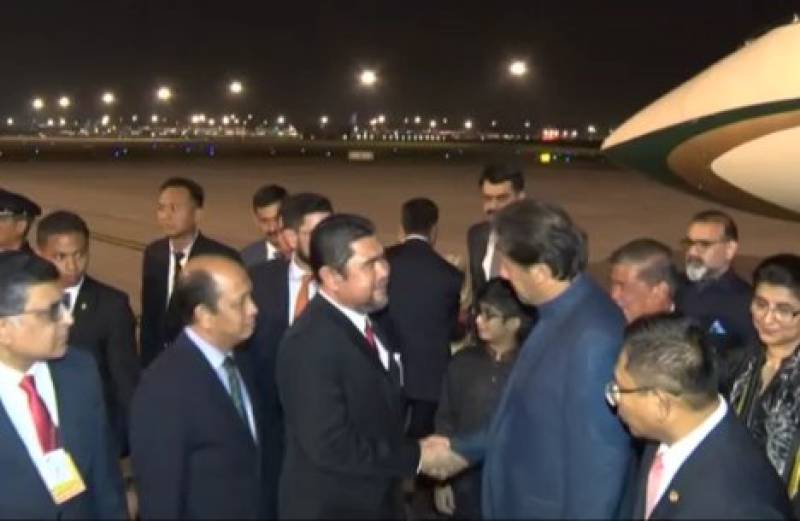 The prime minister was received by Malaysian Minister for Defence Mohamad Sabu and senior officials upon arrival at Bunga Raya Complex, Kuala Lumpur International Airport. High Commissioner of Pakistan in Malaysia Ms Amna Baloch and officers of the High Commission were also present.

According to the Foreign Office, the two prime ministers will have a tete-e-tete, followed by delegation-level talks. They will witness signing of important agreements / memorandums of understanding, and have a joint press stakeout.

Prime Minister Imran Khan will also address a think-tank event organized by the Institute of Strategic and International Studies (ISIS) of Malaysia.

“The prime minister’s visit is another sign of robust engagement between Pakistan and Malaysia, and the shared commitment to further fortify the strategic partnership between the two countries,” the Foreign Office said.

This is Prime Minister Imran Khan’s second visit to Malaysia since assuming office in August 2018. Earlier, he visited Malaysia on November 20-21, 2018.

Prime Minister Mahathir Mohamad visited Pakistan on March 21-23, 2019, and was the chief guest at the Pakistan Day Parade.

The two prime ministers also met on the sidelines of the United Nations General Assembly session in New York in September 2019.

In line with the vision of leadership of the two countries, bilateral ties have deepened in recent years, leading to closer cooperation in the sphere of trade, investment, industry, defence, education and in various international forums.

During his various interactions, Prime Minister Imran Khan will share his vision about Pakistan and underline its positive contribution to regional and international peace, and security.

The prime minister will also highlight the dire human rights and humanitarian situation in the Indian Occupied Jammu and Kashmir, emphasize the importance of averting risks to regional peace and stability posed by Indian belligerence, and underscore the importance of peaceful resolution of Jammu & Kashmir dispute.