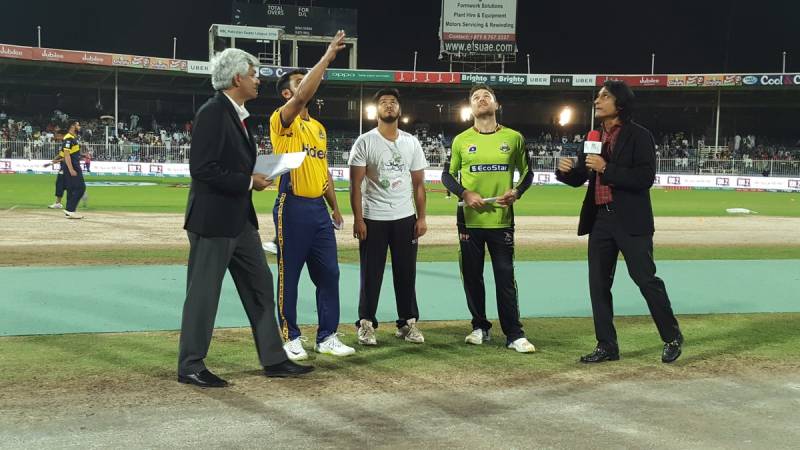 SHARJAH - Peshawar Zalmi beat helpless Lahore Qalandars by 10 wickets in the 14th match of the Pakistan Super League (PSL) at the Sharjah International Stadium on Saturday.

Batting first after winning the toss, Lahore were bowled out at 100, only five if its players managed to enter in double figures.

In reply, Zalmi openers, Kamran Akmal and Tamim Iqbal, completed the chase for the Muhammad Hafeez-led men in yellow. Akmal scored 57, while his Bangladeshi counterpart played a knock of 37 runs.

OUT! 4.4 Hasan Ali to Brendon McCullum

Clouted for a six a ball before, Hasan Ali roars back as we see the traditional wicket taking celebration the very next ball!#DilSeJaanLagaDe@lahoreqalandars lose McCullum 48/1 after 5 overs #YellowStorm #PZvLQ

The cricket fans can also view the match online on the PSL-T20 Official website. For the live score, updates, and analysis, you can follow dailypakistan.com.pk.

Today,  Zalmi fielded their unit without captain Darren Sammy and batsman Harris Sohail as they will be out for a couple of days after picking up injuries. however, fast bowler Hasan Ali was deemed fit and joined  Peshawar.

Liam Dawson was also named in the starting line-up for the first time. On the other hand, Lahore Qalandars made no changes in their squad for the most crucial match.

Lahore, have lost all their four matches in the tournament so far, whereas, Peshawar managed to get four points on the table.

Mostly sunny. No chances of rain