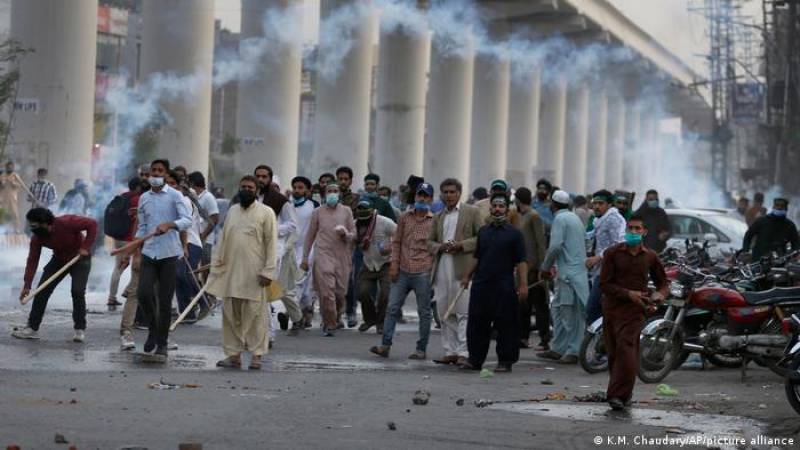 While the roads and public places remained flooded by religious vigilantes clashing with Police for days recently, the advocates and proponents of the four Ps (patience, progress, prosperity, and pluralism) are seen avoiding anything that may irritate the violent Tehreek-e-Labbaik Pakistan’s (TLP) supporters. Nobody wants to become the one who shows indifference to the matter that becomes a question about believing in the honour of our beloved Holy Prophet (SAW). Unfortunately, it has become some sort of social requirement to declare or at least pretend to declare faith. Those who spoke of pluralism and diversity as advocated and favoured by the true Islam, now speak less. Probably they are now tired. Few religious scholars have moved abroad since they felt constantly besieged by a hostile fanatic environment. This rise of radicalism and fanaticism threatens everyone who speaks out against the mullah narrative of faith. How unfortunate this goes for our society that even those people who are Muslims, fear these mullahs since only these people on the streets have the power to label anyone a Qadiani, a blasphemous Shia, or a sacrilegious heretic.

Our country faces a complex situation on the internal security front. These challenges, although, are continually being addressed with the state’s meager resources, but our social, religious, and economic internal fault lines continue to be clandestinely exploited by the external global and regional actors. Bad governance, regional turmoil, a stagnant economy, populism, and terrorism, are further being complicated by differences in religious beliefs. Religious extremism, unfortunately, is likely to continue exacerbating our internal challenges in years to come as well since I do not see an immediate remedy to this at any level. The magnitude of this threat has altered our thinking as a society and even that of our government. People in government including important ministers besides protecting their interest in religious vote-banks have genuine fears for their own lives. Today, with a simple decree about anyone’s faith, fanatics on the roads can bring heads of even the most powerful people rolling on the dirt roads. Such assassinations are professed and encouraged to save Islam from the non-existing danger of elimination by the west.

The religious or to be exact the radical factor affecting our internal security has become inseparably connected with our other vulnerabilities including the economic ones. As I explored a bit to understand the demand by TLP about the eviction of the French Ambassador, it was evident that a publication in France did hurt the sentiments of all the Muslims living around the world. It is also true that unfortunately, very few in the west understand the nature of our sensitivity as Muslims, where the respect of our Holy Prophet (SAW) is disregarded. Muslims frankly feel that the virtue of freedom of speech is being misused and governments in the west have not been able to identify the red line where freedom of speech becomes hurtful to the sentiments of around 2 billion followers of a particular faith. While in France the people take pride and celebrate the centuries-old tradition and the important value of an open society where people from all faiths have respect and complete freedom and autonomy in practicing their faith. However, when somebody infuriated gets up and beheads a French citizen in a busy public place or walks into a police station to stab an officer in the neck, the neutral opinions about religion particularly about Islam are liable to change. This has started to happen in France. While a single hurtful statement or publication is attributed to the entire nation of France, similarly a single act of terrorism gets attributed to an entire Muslim community. In, Pakistan, the government has succumbed to the TLP pressure and has recently introduced the debate in the National Assembly of Pakistan about expelling the French Ambassador. I do not understand how the government agreed to this with TLP in the first place and made a false promise a few months back. If considered without any bias, the present French Ambassador Mr. Marc Baréty, is probably the best French diplomat Islamabad hosted. He understands Islam thus can help Pakistan in persuading his government and other European countries to know how Muslims feel about this particular issue. As I gathered information on him, I was surprised to learn that as a habit he recites Holy Quran every morning. Mr. Baréty, is married to a Muslim Algerian lady and has served only in Muslim countries during his entire service. He speaks Arabic better than most of mullahs and has studied volumes on Islam.  Besides, he is known as a friend of Islam amongst French Muslims. I was also told that he has earlier served in Iran, Malaysia, Oman, Saudi Arabia, Tunisia, and Kuwait where he enjoyed a wonderful repute.

While Pakistan has started the debate in National Assembly, the French people are digging up certain bad memories from the past. The unfortunate killing of French engineers in Karachi in a terrorist attack has suddenly come up in French media. The question of Mirage French fighter jets on the inventory of Pakistan air force and submarines used by the Pakistan Navy has also suddenly become a topic of discussion in France. Pakistan understands that any diplomatically hostile move towards France will not be taken well by all the European countries. France is an important country and our options and economic opportunities in turning global and regional environments have always been meager. Due to our label of a religious hardliner country, Pakistan could not acquire the benefit of any international trade regime. Thus, as a country, we remained poor. Today, the country remains violently divided on the basis of religion and sects where people cannot tolerate differences of opinion and show no forbearance for any logically acceptable clarification.

Those who have studied Allama Iqbal understand his uncompromising rejection of mullahs, their interference in the society, their domination of the religious discourse, and even their attempts to steer governance. I believe, Iqbal already saw this ahead of his time when the clerics and mullahs grow so authoritative that even the state does not dare not challenge their influence in any way. Though the National Action Plan (NAP) was the first step in the right direction, yet what was required was a manifestation of this plan through a comprehensive government strategy built on NAP and implemented under a multi-pronged policy to address the issue of religious extremism. Our national policy must work out a society-centric framework, integrating all the elements of national power for the well-being of our society. The absence of genuine socio-economic development has provided ethnoreligious elements and regional forces grounds to exploit and weaken Pakistan internally. Understandably, Pakistan will take some time to undo the damage done so far to the internal security fabric but it would be better if we start taking steps as early as possible.

Trump’s economic onslaught on the world: May Pakistan be next?