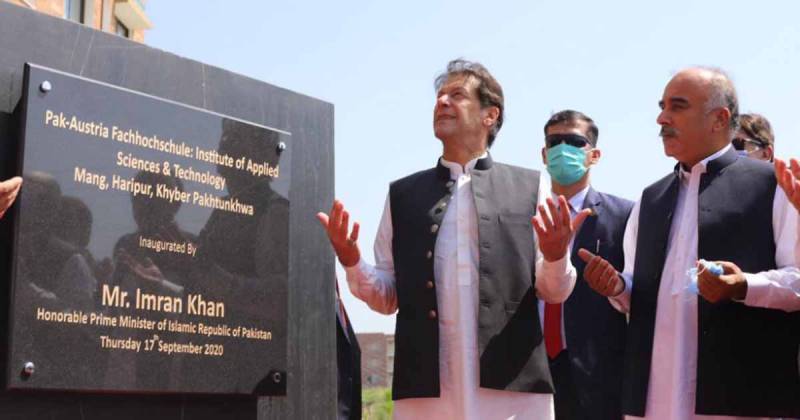 On September 17, a historic event occurred. The prime minster of Pakistan inaugurated a beautiful campus of Pakistan’s first foreign engineering university, the Pak-Austria Fachhochschule, in Haripur Hazara, about 40 miles from Islamabad.

The university has a lake and is surrounded by beautiful undulating hills with wild flowers and medicinal plants growing on them. It is the first university in Asia, and possibly in the world in which eight leading engineering universities in Austria and China have come together as partners. These include three Austrian Universities of Applied Science and Engineering (Fachhochschule) and five Chinese universities that are leaders in their respective disciplines.

Pakistani students will thus have the opportunity to benefit from lectures and courses of these foreign universities, and some will even get degrees from those universities. A dream that I had dreamt for the last 15 years has at last come true and a wonderful beginning has been made towards establishing a network of such high-quality foreign engineering universities in Pakistan. Kudos to PM Imran Khan.

The courses that will be offered by F H Johanneum (Graz, Austria) will be in the fields of electrical/computer engineering, biomedical science and information design. MCI Innsbruck Austria will offer courses in environmental engineering while Johannes Keppler University in Linz, Austria will offer postgraduate M. Phil and PhD level training in artificial intelligence. In addition to these, several leading Chinese universities are formally involved to set up four postgraduate Centers of Excellence, making it the most powerful educational program in the region. MS and PhD level courses on high speed railways engineering will be offered by Beijing Jiaotong University, the top university in China in this field. Similarly, Shenzhen Institute of Advanced Technologies, the leading institute in China in this fast emerging field, and Guangdong University will offer postgraduate training programs on artificial intelligence.

Pakistan possesses a huge amount of unexploited mineral wealth, but we do not have the capability to extract these minerals and market them internationally. So China’s leading university in this highly specialized field, China University of Mining and Technology, has agreed to set up a Center of Excellence in this field which will train students at MS and PhD levels in mining, and mineral extraction and processing technologies. Another Center of Excellence will be established in advanced agricultural sciences, with focus on hybrid seed production, biotechnology for increasing quality and yields as well as food processing and packaging technologies will be established by Jiangsu University.

The involvement of no less than eight foreign universities in the Pak-Austria Fachhochschule will add new dimensions to higher education in Pakistan. The center piece of the university would be the Technology Park to foster innovation and promote new start-up companies with close linkages with foreign and Pakistani industries. Emphasis will be on applied research of industrial importance. The aim will be to foster strong linkages between industries in Austria and China with those in Pakistan through the development and manufacture of innovative products both for the local market and for export.

The Pak-Austria Fachhochschule will offer Bachelors, Masters and PhD programs. The curricula will be identical to those followed by the foreign collaborating universities in line with the industrial strength of the partner countries. The education processes will be as per standards of the foreign partners and will meet HEC and PEC (Pakistan Engineering Council) criteria so that qualifying students can get double degrees, provided that the educational programs are accredited by the partnering foreign universities.

I had embarked on this visionary project that I conceived in 2005 to establish several world class engineering universities in collaboration with Germany, France, Italy, Sweden, Austria, China and Korea. The idea was simple but powerful. If we can have school level education through the O Level and A level Cambridge University programs, why not do the same at the undergraduate and postgraduate levels too in partnership with leading foreign universities? This could provide world-class engineering education in Pakistan with standards equivalent to those in foreign universities and degrees being offered by these foreign partner universities.

As a result of our efforts during 2005-2007, nine top German engineering universities formed a consortium to establish the Pak-German University in Lahore. Similar consortia were formed with the other countries to establish universities in Karachi, Islamabad, Sialkot, and plans were underway to set two such universities in Peshawar and Quetta. The heart of each university would have been an integrated technology park. A number of foreign companies such as Siemens and Eriksson had agreed to establish their Research & Development Centers in these universities.

A huge effort was involved to convince the leadership of top engineering universities in Europe and Asia to establish their programmes with new universities in Pakistan. Prof Haroon Ahmed (Cambridge University) and Prof Sohail Naqvi (executive Director HEC) travelled with me across the world in persuading foreign universities to join us in this far sighted initiative. The development schemes to establish these foreign engineering universities were approved by ECNEC in February 2008, and classes were to begin in October 2008. Unfortunately the PPP government decided to abandon the scheme in 2008 and the agreements reached with 30 top universities in Europe and Asia came crashing down.

However persistence pays. I approached Imran Khan in 2017, before he was elected, and presented my idea. He welcomed the idea and promised to provide funds through the provincial government of Khyber Pakhtunkhwa. The project was approved in January 2018. Lands in a beautiful location with a natural lake and undulating green hills were identified about 40 miles from Islamabad in Haripur, Hazara. The land was acquired, campus designed, planning completed, agreements reached with eight partnering universities in Austria and China, buildings built and the Pak-Austria Fachhochschule inaugurated – all within a period of about 30 months! All faculty members hired have PhD degrees, making it the first university of Pakistan with 100 percent PhD level faculty. Admissions were opened last week and a flood of applications are being processed.

All this became possible because of the constant support of the prime minister as well as the KP government and the day and night efforts of Project Director Prof Nasser Ali Khan and his excellent dedicated team. The guidance and assistance provided by Prof Haroon Ahmed, Prof Sohail Naqvi, Prof Muhammed Mujahid, Prof Michael Rode (Innsbruck, Austria) and Prof A Min Tjoa (Vienna) played a critically important role in bringing my dream to a reality.

No university has been ever built so quickly in the history of this Subcontinent, let alone one in partnership with so many foreign partners who will offer their degrees to qualifying students. A network of such foreign universities is now being planned across Pakistan that will have the highest international standards and that will play a pivotal role, Inshallah, to transform Pakistan into a strong Knowledge Economy.

The writer is the former chairman of the HEC, and president of the Network of Academies of Science of OIC Countries (NASIC).