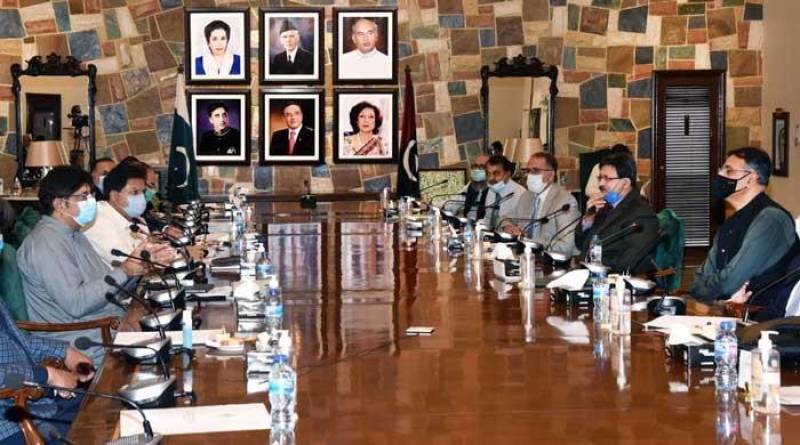 ISLAMABAD – The federal and Sindh governments have agreed to start trial runs of local trains within 12 kilometers during the next two months and then plan how to synchronize it with the modern circular railways system in the next phase.

This decision was taken in a meeting between Federal Minister for Planning & Development Asad Umer and Sindh Chief Minister Syed Murad Ali Shah, said a spokesperson to the CM Sindh in a statement on Saturday.

The meeting was held to chalk out a strategy in respect of launching KCR project as was decided in the CCI meeting and to implement the supreme court directives to start local train projects in the city of Karachi.

Speaking on the occasion, Federal Minister Asad Umar said that the federal government was serious to start the KCR project at the earliest.

The federal minister and the chief minister also discussed how to start local trains within the next few months and whether the local train system would sink in with the modern railway system of KCR.

The meeting decided to start local trains within a span of 12 kilometers from City station to SITE as a trial run within the next two month. It was also decided that a highly professional consultant would be hired to study how to synchronize the local train system with the modern KCR.

Speaking on the occasion, the CM Sindh said that the KCR was commissioned in 1964 and remained effective till 1984. It was closed in 1999; as it lost its operational efficiency.

He said that the KCR project was agreed in CPEC related JCC meeting on December 29, 2016. On November 22, 2017 the JCC confirmed that the KCR project was technically qualified and mature for implementation, he said and added on December 20, 2018 the importance of KCR was recognized and on November 5, 2019 it was decided that Pakistan would submit a financing request to the Chinese government.

Secretary railways Habib-ur-Rehman gave a detailed briefing about the project of KCR and local train system and discussed various options to start the project.

He disclosed a three phased plan under which construction of single line track, rolling of stock, deputation of human resource and operation were in the first phase.

In the second phase, he said, the dualization of track, singling, fencing and flyovers/underpasses would be constructed.

In the third phase, as said by the railway secretary modern urban rail-based Mass-transit, transaction advisory services for PPP mode, financial model and government model and cross subsidy model such as land commercialization would be undertaken, he said.

Chairman P&D Sindh Mohammad Waseem said that all encroachments have been removed. The Sindh government would construct flyover/underpasses where necessary along with construction of fencing along the route.

He said that the provincial government would lay a sewerage system between urdu college and Depot hill and make arrangements for proper disposal of industrial effluent from the SITE area.