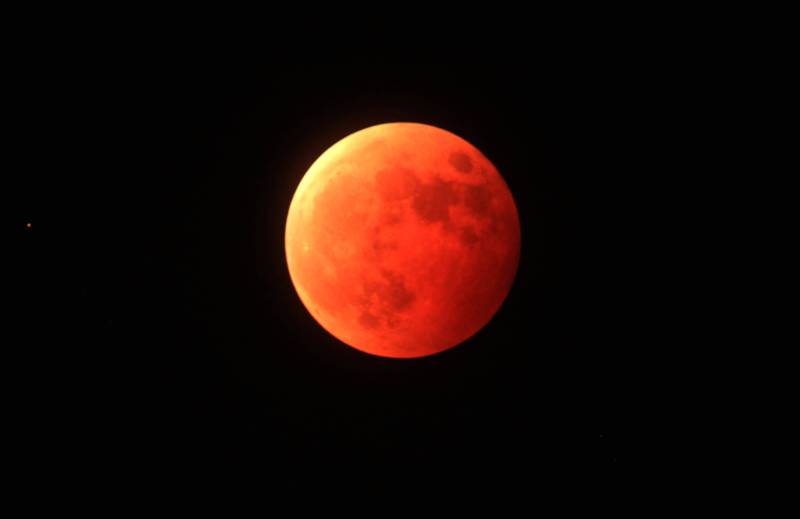 The moon will slowly wander into the Earth's shadow. Eventually, the shadow will completely envelop the moon and block nearly all sunlight, creating a total eclipse and causing the moon to glow red from small amounts of light passing through our atmosphere: The total eclipse will only be visible to residents in the western half of the United States (as well as people throughout the Pacific, East Asia, and Oceania). It starts right at 4:58 am Pacific and will last just five minutes.

On the East Coast, the sun will have already risen by that time, making the blood moon invisible. However, Easterners can wake up before sunrise and get a glimpse of the partial eclipse, starting around 6:16 am Eastern.

Unlike a solar eclipse, a lunar eclipse is totally safe to watch without eye protection, and lasts for a few hours.

Normally, light from the sun directly hits the moon, which is why the moon is illuminated at night. Every so often, though, the sun, Earth, and moon align. When this happens, our planet blocks the sun's light, causing an eclipse.

When only part of the moon enters the core part of the Earth's shadow (the umbra), just part of it darkens. This is a partial eclipse, and it's what US residents on the East Coast will be able to see if they wake up early.

When the entire moon enters the umbra, nearly all the sunlight is blocked from hitting it. This is called totality, and it's during this stage that the darkened moon will glow red - which is why lunar eclipses are sometimes called blood moons.

The great thing about lunar eclipses is that unlike solar eclipses, they don't require any sort of eye protection to watch - all you have to do is look to the sky to see an astronomical wonder. If you want a really good view of it, you can use binoculars or a telescope.

People across most of the US will be able to see the early partial stages of the eclipse, which will begin at 6:16 am ET. However, sunrise will interrupt it for people east of the Mississippi.

Most residents of the western US, though, will be able to see a total eclipse right at 4:58 am PT (or 5:58 am MT). It'll only last for four minutes and 43 seconds, because the moon is just briefly skimming the outer edge of the umbra.

Sunrise will end the latter stages of the partial eclipse for West Coast residents, too, but the entire thing will be visible for people throughout the Pacific and Oceania.

Most of the moon will glow some shade of intense orange or red, thus the "blood" moon nickname.

"That red light shining onto the moon is sunlight that has skimmed and bent through Earth's atmosphere: that is, from all the sunrises and sunsets that ring the world at any given moment," said Alan MacRobert of Sky and Telescope magazine.