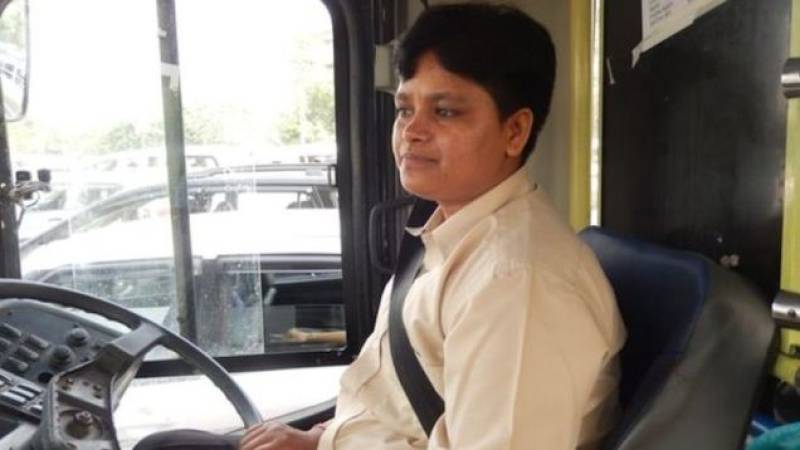 DELHI (Web Desk) - The first woman bus driver in India's capital has told BBC Hindi that her priority is to ensure the safety of her female passengers.

Vankadarath Saritha, 30, received messages of support from passengers on her first day in the job - but also had to deal with malfunctioning doors.

Her appointment comes at a time of growing public anger about harassment of women on public transport in Delhi.

Officials hope the move will inspire other women to drive as a career.

Some Indian states have had women bus drivers for years, but this is the first time the capital has hired a woman to drive a Delhi Transport Corporation (DTC) bus.

Ms Saritha, who has worked as a private chauffeur, took the wheel of bus number 543 accompanied by much public interest, reports BBC Hindi's Indu Pandey.

Passengers seemed happy to see a woman bus driver - many came forward to take a good look at her, while others started taking her photos on their mobile phone cameras, our correspondent says.

Before getting down, some of the passengers called out: "Thank you, madam."

But day one was not without its hitches.

Shortly after Ms Saritha set out, the doors developed a snag and would not shut or open properly. Two technicians then responded to her call to fix the problem and the bus resumed its journey soon after.

Ms Saritha, who is from the southern state of Telangana, said she took up driving to support her family.

"We are five sisters. I first learnt to drive an auto rickshaw and then drove a van for a college, before driving a bus."

Now, she says, she intends to help her family with her salary and buy gold ear-rings for herself.

"Having a woman driver will help improve the image of our service," DTC official RS Minhas said. "We had received seven to eight applications and we hired Saritha. Now we will advertise again and hire more women drivers."

Transport services in Delhi have been deemed unsafe in recent years after a 23-year-old student was fatally gang-raped on a bus in Delhi in December 2012.

And a driver from the web-based taxi firm Uber is on trial for raping a female passenger last December. He has pleaded not guilty.

Women-only carriages are provided on trains and metro services in Delhi in an attempt to improve safety and comfort for passengers.