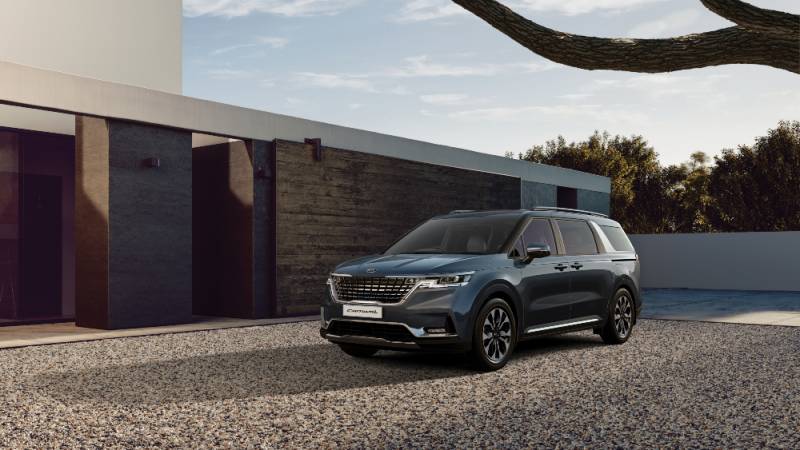 KIA has taken Pakistan by a storm leaving less chances for its competitors to perform in the coming year. We were already so overwhelmed by KIA’s four new vehicles roaming all around Pakistan and now they have surprised us with the introduction of the all new KIA Carnival. This comes as a complete surprise as the new Carnival was kept a secret and not revealed in the entourage of #WeAreUnstoppable branded vehicles driving across the country.

The new KIA carnival is a car you've haven't seen before. With new features and a new body this car is going to be the next big thing you’ve been waiting for. The new KIA carnival has been given a drastic change as the body has been designed in a SUV style which is completely different from the previous model. Based on the specs revealed, Carnival comes with a more advanced 3.5 litre engine over the previous 3.3 litre engine, the vehicle features an 8 speed transmission giving room for robust performance and optimal fuel economy. The new features KIA carnival offers is unparalleled in its league, introducing Integrated memory seats, Dial type gear shift, Paddle shifters, Smart key, power tailgate, smart sliding doors, walk in device, heated and ventilated seats. The Carnival has truly positioned itself as the dream car with luxurious interior comprising a blend of two colors with hydrographics garnishing.

After the success of the Sportage and Picanto, KIA has once again impressed its fans initially by glimpsing car enthusiasts with four new variants and now introducing the all new KIA carnival. This Grand utility vehicle is said to fall in a price bracket between Rs.8 million to Rs.9 million.

Automobile users and the general public have been in awe after four KIA #WeAreUnstoppable vehicles were spotted driving ...

KIA has assured its customers being truly unstoppable as the automotive giant has struck the local market with new cars back to back with no plans to halt anytime soon. An unexpected surprise catching everyone’s attention, KIA fans will be thrilled on the new Carnival’s launch on local roads!

Automobiles users in Pakistan are delighted after spotting a fabulous fleet of KIA cars roaming the streets of Karachi. ...