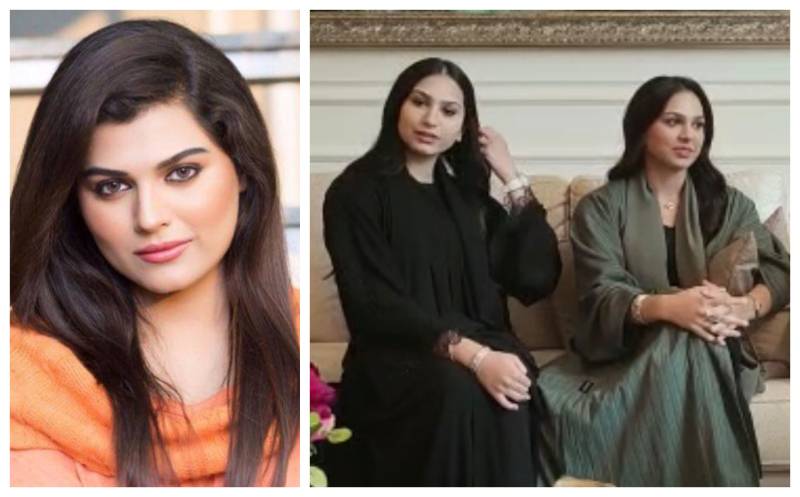 LAHORE/DUABI –  Actress and model Sophia Mirza’s twin daughters have revealed their mother told them to steal their passports, take money from their father and run away from their Dubai home.

Fifteen years old twin sisters Zainab Umar and Zunairah Umar have spoken for the first time about their mother Sophia Mirza, 42, during an interview with a Pakistani TV channel and in a written affidavit submitted before the Supreme Court of Pakistan.

Sisters Zainab Umar and Zunairah Umar said they were living in Dubai with their father Umar Farooq Zahoor happily and on their free will and allegations by their mother are false and fabricated that they are being held against their wishes.

The twin sisters spoke out after Sophia Mirza held a press conference demanding the recovery of her two daughters from Dubai-based Norwegian Pakistani Farooq Zahoor, who is Liberia’s Ambassador at Large for Pakistan and South East Asia.

Sophia Mirza, 42, held press conference after a major investigation published in The News and Geo revealed that the Federal Investigation Agency (FIA) on instructions of Shehzad Akbar, former Accountability and Interior Minister of Imran Khan, targeted Umar Farooq Zahoor on a complaint by Sophia Mirza who filed a complaint against her former husband under the name of Khushbakht Mirza – without revealing at any stage that she was actually the former wife of Umar Zahoor. The FIA went on to investigate and issue Interpol Red Arrest Warrants against Mr Zahoor in three cases which were already closed due to lack of evidence including a case in which NAB had cleared him.

The teen twins have negated claims made by their mother Khushbakht Mirza (known in the showbiz industry as Sophia Mirza and Sofia Mirza) at the press conference, stressing that the model was holding media talks to gain publicity and win media sympathy.

Sofia Mirza’s daughters said their mother came to Dubai multiple times in the last few years and despite being in constant contact with her daughters refused to meet them and ignored their requests to meet. “We requested our mother to see us when in Dubai but she ignored us, did her modelling shoot and went back. She appears on TV to level allegations that she is seeking to recover to run a campaign against our father. She doesn’t care about us. She cares only about her image and her media publicity.”

Zainab Umar and Zunairah Umar said they had chosen to live with their father in Dubai and were living with him happily and on their free will. “Our mother is after money. She encouraged us to try open the safe, take passports and money and run away from home. It’s selfish of her.”

This publication also has a copy of a previous written affidavit provided by both sisters to the court, making serious allegations against their mother.

In the written affidavit, signed separately by both sisters but carrying the same statement, the twin sisters said they have been living happily with their father for over 12 years in Dubai.

They said their mother, rather than visiting them, resorted to social media platforms and for several years, she has been “publicly uploading materials and making statements” to indicate that her two daughters have been forcibly removed and kept by Umar Zahoor against their will.

They said their mother’s actions have “ruined” their peace of mind and had “adversely affected our mental and psychological health” since the media related material is accessible to everyone.

Zainab Umar wrote: “Me and my sister have faced extreme embarrassment and bullying at our schools and we were so distraught that our father has arranged for us to change our schools thrice to protect us from the effects of our mother’s statements.”

Zainab Umar’s affidavit reads: “I wish to negate all the baseless allegations of my mother. We are leading a healthy, happy, peaceful and productive life here and our all needs including lodging, study, food, entertainment are sufficiently met. Our father spends frequent time with us and we have and are residing with our father happily and wilfully.”

One of the affidavits continued: “Recently we have faced another wave of public humiliation by our mother (Ms Khushbakat Mirza) when she has managed to get yellow warrants issued. Our father has tried to assure us of or well-being but me and my sister have withdrawn from our friends who inquire if we are kept hidden by our friend from our mother, I am tired of the humiliation and the backlash that I and my father have to encounter, I am tired of the humiliation and the backlash that we have to encounter. I am heartbroken after realising that our mother, despite being aware of our exact whereabouts since she sent us a couple of presents through mail, decided to use us as a pawn and told everyone that we need to be located. Me and my sister, when tormented by our mother, have confronted her and asked her why she would continue to shake our lives and peace. She has our contact numbers and address but yet lied and declared us missing without any regard of the torture it would inflict on both of us.”

The affidavit added: “I and my sister are scared of what we shall face if we are physically exposed to the real abuse that our mother has portrayed in her public statements. I hereby state that I wish to continue living with my father and do not wish to either meet or live with my mother since I don’t wish any further disturbance and trauma inflicted upon me or my sister.”

Both sisters offered in their affidavits that they were prepared to record their statements through Skype or any other electronic mode in order to ensure that they were making the statements without any coercion.

Court papers also reveal that Umar Farooq Zahoor has repeatedly offered to the court that he was willing to arrange the meeting of Ms. Khushbakht Mirza with daughters Zainab Umar and Zunairah Umar including bearing the cost of travelling and lodging of Ms. Khushbkaht Mirza during her visit and stay in the UAE.

In response to a court order of March 2013 by Pakistan’s Supreme Court, Umar Zahoor paid a hefty amount of Rs.10,00,000 to Ms. Khushbakht Mirza in order to financially assist her to travel to UAE and meet with her daughters.

The Ministry of Foreign Affairs, on the directions of the Supreme Court of Pakistan, also paid her a sum of 15000 AED as financial assistance for hiring a counsel of her own choice in UAE to contest the matter of custody of daughters before the Courts in UAE but Sofia Mirza launched no case.

Sophia Mirza was contacted for a response but she didn’t respond to the statements and allegations made by her twin daughters. However, she has previously maintained that her daughters were kidnapped from Pakistan by their father and that they are being held against their will in Dubai and that they should be brought back to Pakistan.