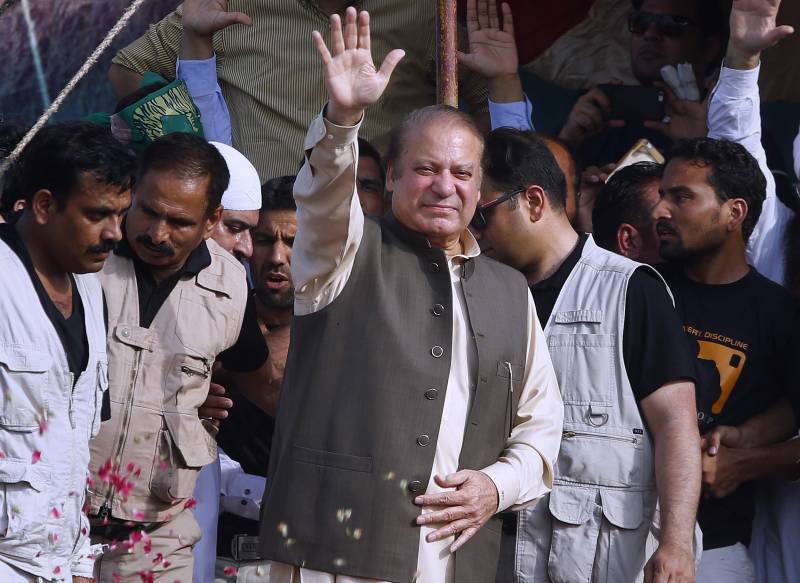 GUJRAT - Deposed Prime Minister and president Pakistan Muslim League-N (PML-N) Nawaz Sharif on Sunday said another case was on the anvil against him to completely oust him from the race for the elections.

"Attendance of such a gigantic crowd in PML-N rally is a testimony to the fact that the nation has awakened now and decided to fight for the sanctity of votes finally,” he said while addressing the first public rally, in Gujrat’s area Kotla, after the PML-N won the Senate elections.

In his address, the former prime minister said that his vision and narrative has reached Kotla.

“I know you people have decided to fight a decisive battle,” said Nawaz to the crowd.

Nawaz said that the Senate papers of his party’s candidates were rejected as it had his signature as the president of the PML-N.

“In this manner, the power plants and motorways should also be shut down as they have my signature,” remarked the former prime minister.

The ex-PML-N president said the nation should now do away with the plague that had been infesting the country for the last 70 years. He said the sanctity of ballot was mauled by ousting him as a prime minister. Similar decisions had been taken in the past 70 years as well, he added.

He said he was ready to appear before the court if he had taken any kickback or done corruption in public exchequer, however, the case was that their fury and revenge could not die down so far and they were going to file a case against him to oust the PML-N from elections.

Nawaz Sharif said his message had reached up to all hearts of Pakistanis and every corner of the country, added that the upcoming general elections would be a referendum regarding his disqualification.

She presented a salute to all the MNAs and MPAs of the PML-N for “writing a new history”. She said that the name of Nawaz Sharif was affixed with every development projects and no power could remove it.

Maryam Nawaz impressed upon the people to extend their support to Nawaz Sharif for the revival of the sanctity of the vote.

The PML-N leaders were holding the rally following their lead in Senate polls, according to unofficial results.