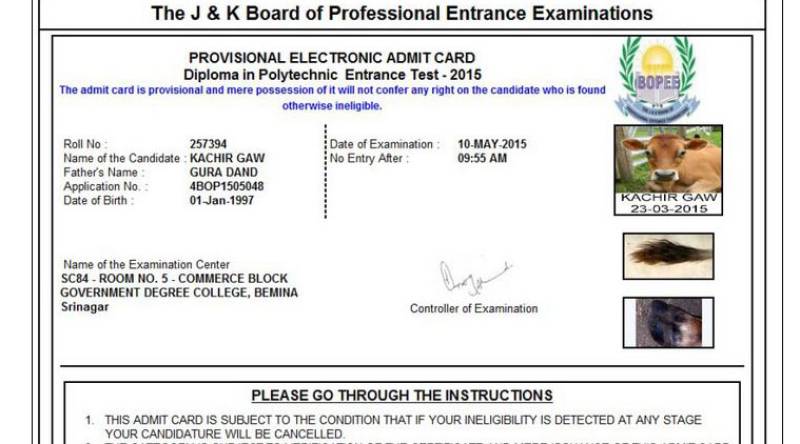 SRINAGAR (Web Desk) - A Budgam resident, who managed to get a hall ticket for his cow to write a professional entrance examination, said he is determined to take the bovine to write the papers.

"It is my legal right to take my cow for the exam. I have paid the fees, so it is my right to take the cow there," Abdul Rashid Bhat told reporters.

"It was not my intention to hurt anyone's feeling or make a joke of someone. I filled this form only to check the system," Bhat, who hails from Chadoora area of central Kashmir Budgam district, said.

In an attempt to expose the loopholes in the online registration system of Jammu and Kashmir Board of Professional Entrance Examination (BOPEE), Bhat had managed to acquire an admit card for his cow to write the examination for admission to Diploma in Polytechnic College.

The admit card was issued by the Board in the name of Kachir Gaaw (Brown Cow), which is supposedly daughter of Gura Dand (Red Bull). The cow has been allotted a seat at Government Degree College, Bemina for writing the examination scheduled to be held on May 10.

Bhat said the present system of BOPEE allows all and sundry to register for the examinations. "You also know how BOPEE exams are conducted - it can be a cow, calf or Buffalo. I thought of trying to fill a form for a cow and I completed all formalities including payment of the fees," he added.

A candidate sitting for the examination requires to have passed the matriculation examination from any recognised board of school education. However, those candidates who have appeared in the qualifying examinations, can also appear subject to their passing. "My cow's result is awaited," Bhat said with a smile.

The incident came to light on Sunday after opposition National Conference spokesman Junaid Azim Mattu uploaded a copy of the admit card on Twitter. "The J&K Board of Professional Entrance Examinations issued this roll-number slip to a cow after due verification. I have both the Provisional Confirmation Page for applicant Ms 'Kachir Gaaw' as well as details of payment she made to BOPEE," Mattu tweeted.

.@imranrezaansari Even if she has four legs, a tail and two big flappy ears and answers all questions in 'Moo'? :o pic.twitter.com/DQr38ltmF3

BOPEE chairman Ghulam Hassan Tantray has ordered an inquiry into the incident.