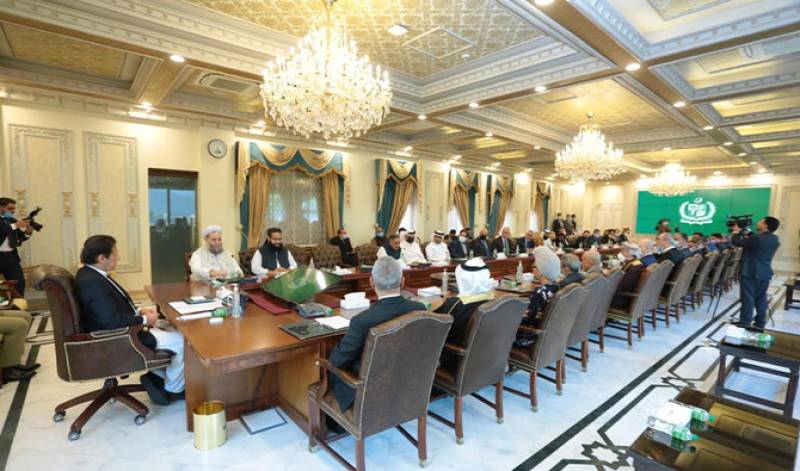 ISLAMABAD – Prime Minister Imran Khan Thursday called on the envoys of Muslim countries and discussed the concept and vision of the Rehmatul-Lil-Alameen Authority.

According to a press release issued by Prime Minister Office, the premier underscored the appeal of Islam’s universal message and the bounties of following the fundamental precepts of the Riasat-e-Madina, including, in particular, the principles of justice, rule of law, the welfare of the people and an unswerving focus on the acquisition of knowledge.

Prime Minister @ImranKhanPTI interacts with Envoys of Muslim countries on the establishment of the Rehmatul-lil-Alameen ﷺ Authority pic.twitter.com/j4GSDBBG5m

Khan, during the interactive session with the resident Ambassadors of Muslim Countries, elucidated that the key objective of establishing the authority was to develop an understanding of the ways of life of Prophet Muhammad (PBUH), through collaborative research and to provide essential tools to the youth to preserve their Islamic identity, values, and culture in the face of diverse social and digital media influences.

Khan also highlighted the role of media and the influence of their content on the lifestyle and personality development of youth. He further stressed the need for teaching ethics in schools in order to help build the character of the Muslim youth in light of Islam.

It further added that PM also invited constructive ideas from the foreign ambassadors and hoped for active collaboration among Muslim countries.

Meanwhile, envoys of the Muslim countries commended the Rehmatul-Lil-Alameen Authority and shared the ideals of his endeavor. The envoys also hailed PM’s support for causes of the Muslim Ummah at international forums and assured all possible cooperation.