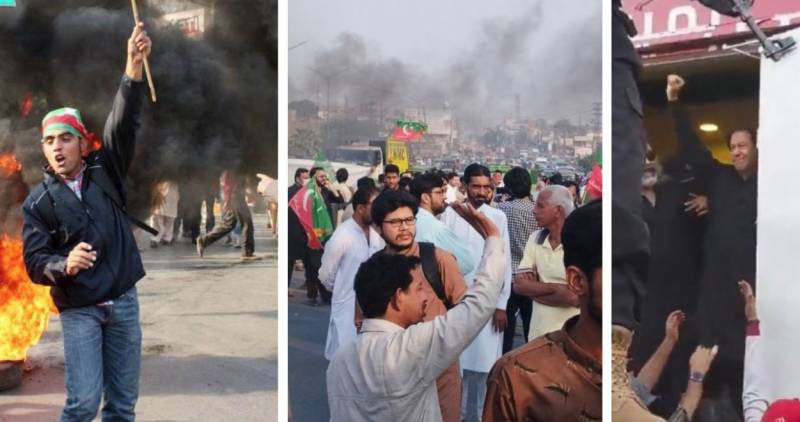 ISLAMABAD – Pakistan Tehreek-e-Insaf (PTI) workers are holding protests in various cities across the country against an assassination attempt to party chairman Imran Khan a day earlier during long march near Wazirabad.

Khan, 70, was wounded after he was shot in the shin when armed men targeted the PTI leaders as the carvan was heading to Wazirabad. During the incident, one man was killed while several PTI leaders, including Faisal Javed, Ahmed Chattah and Umar Dar, were among the 14 people injured.

The PTI chief is currently in stable condition as his medical procedure was completed at the Shaukat Khanum Hospital in Lahore.

Soon after the assassination, the political party had given a call for countrywide protests after Friday prayers.

In line with the call, protests are underway in Karachi, Islamabad, Lahore, Faisalabad, Peshawar, Multan and others cities of the country.

However, situation turned violent in Lahore, Karachi and the capital city after clashes ensued when protesters attempted to enter the Red zone areas.

In Islamabad, PTI workers clashed with law enforcers at Faizabad Interchange in the twin cities where cops is trying to disperse the crowd using tear gas.

In Lahore, protesters have stormed the Governor House Punjab as they broke its gate and lights installed on the wall. They also put tyres on fire outside the governor house. The current governor of Punjab is Muhammad Baligh Ur Rehman had been appointed by Prime Minister Shehbaz Sharif.

protests are getting out of hand this is in lahore outside governor house what have the neutrals done. #SackGeneralFaisal #عمران_خان_ہماری_ریڈ_لائن_ہے pic.twitter.com/3k3RUi1eHm

Reports said that the Mall Road is completely blocked while commuters are facing problems at GPO Chowk, Shahdara, Thokar Niaz Baig and other areas in Lahore.

The PTI chief is set to address the national today wherein he is expected to talk about assassination attempt on him and killing of journalist Arshad Sharif.

Videos shared on social media show the attacker waving a gun in the air and firing bullets when one of the PTI supporters jumps on him to snatch the pistol.

Onlookers said that the attacker was carrying an automatic pistol and he missed the target after he captured the long march participants.

Taking to Twitter, PTI shared a video of the moments when Khan was shifted being rushed to a hospital from the container. The PTI chief can be seen encouraging his supporters by waving his hand despite being hit by bullets on his legs.

“The Jihad will continue,” the caption for the video post read.

The former prime minister was shifted to the Shukat Khanum Hospital for treatment and his condition is set to be out of danger.

Meanwhile, a PTI leader, Raoof Hassan, claimed that there were two attackers, adding that one was killed on the spot while the other has been arrested.

Dr Sultan said that Khan received a bullet wound on his right leg, adding that some parts of the bullet are still visible in the X-ray report. He added that Khan will be discharged from the hospital after complete treatment.