No place for foreign stooges in Balochistan, says CM Zehri 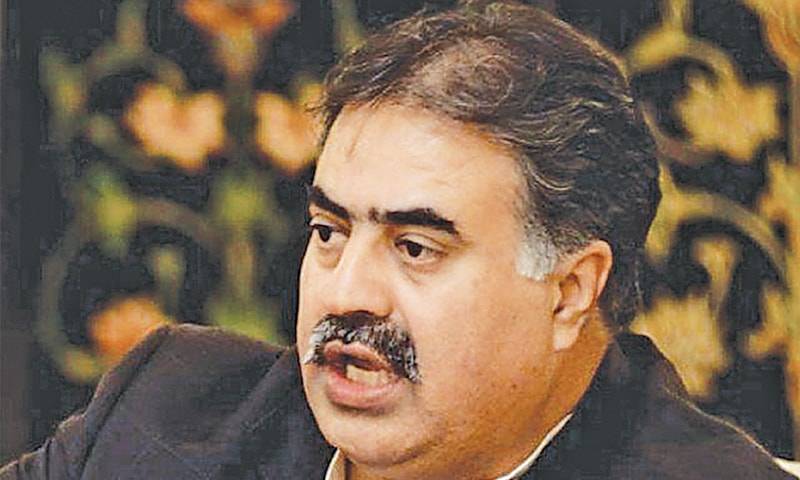 QUETTA (By Umer Shami) - There is no place in Balochistan for the people who question the integrity of Pakistan, Chief Minister Nawab Sanaullah Zehri said on Sunday.

He was talking to a selected group of senior media persons at his Secretariat. Anwar-ul-Haq Kakar, the spokesperson of Blaochistan Government, was also present on the occasion.

“Pakistan has given us a lot. We have declared open war with the handful of extremist and separatist elements conspiring against Pakistan. They are being funded by our enemies but they are on the run and will be defeated comprehensively,” the Balochistan CM added.

He further said that the Baloch people have taken to streets against the recent provocative statement of Indian premier Narendra Modi. “Why not even ten persons gathered anywhere in Balochistan to support the assertions of Mr Modi? The reason is simple. The so called separatist elements do not enjoy any public support.”

Zehri termed the security situation in the country’s largest province satisfactory. “Apart from the recent tragic event where scores of innocent lawyers were martyred, Balochistan has been relatively peaceful for quite some time due to successful operations against the miscreants by the security forces.

“In some operations, I personally accompanied the security forces to lend moral support to the troops.”

According to the CM, the Balochistan government is sending parliamentary delegates to different international forums including the United Nations. “These international institutions talk of democracy all the time. The parliamentarians are the true representatives of the Baloch people and when they talk at these forums their voice carries weight.”

He also said that he was planning to write an open letter to the UN Secretary General to apprise the world of the atrocities committed by these miscreants in Balochistan. “When someone is killed in a security operation hue and cry is raised but no one speaks at the plight of ordinary citizens of Pakistan butchered mercilessly in terrorist attacks. There should be no double standards.”

Zehri, however, admitted that fighting religious extremism still remains a challenge. “The war must not stop until all these elements are eliminated. This is a battle for the heart and soul of Pakistan and thus need to continue relentlessly till conclusion.”

He went on to say that the provincial government and security forces were on the same page and enjoyed good working relationship and coordination. “Baloch youth has shown great enthusiasm in joining the armed forces in recent years and now the number of Baloch recruits exceeds 21000,” the CM told the media persons.

He added that the issue of missing persons was being blown out of proportion. “There is no missing person in my tenure of seven months. Also the lists circulated in this connection are mostly fake. The number of such person does not exceed 50 and most of them are sitting across the border.”

Responding to a question regarding pace of development of Gawadar Port and subsequent future prospects for the economy of Balochistan, the chief minister said that Balochistan is expected to get benefits worth billions of rupees once CPEC is executed. “Gawadar is situated right at the mouth of the Strait of Hurmuz. It is going to be the most sought after port to trade with Africa and Chinese exporters and importers will have access to the most efficient trade route in the shape of Gawadar".

“Some foreign powers are creating hurdles to disrupt the CPEC but the government and armed forces are fully committed to complete this project of vital strategic and financial benefit for not only Balochistan but whole of Pakistan.”

He was sure that these projects will also create immense employment opportunities and local population will be given priority in this respect.

He also shared the government’s plans to undertake census next year. “The only reason for delay is the non-availability of manpower from army. It is our considered opinion that a credible census needs the involvement of the armed forces.”

The Balochistan Government is trying its utmost to introduce good governance and start mega developmental projects to create economic activity, Zehri said, adding: “We are the ones who have tackled the menace of corruption. NAB will be giving a cheque of approx. Rs2.5 billion to the Balochistan Government in the coming days. This amount was recovered as a result of drive against corruption.

“We plan to build a state of the art hospital in Quetta with this amount.”

Commenting on the political challenge posed by Imran Khan and Tahirul Qadri, the CM was quite dismissive of its impact. “There is no response to these calls in Balochistan and even in Punjab. I see that very few people have taken to streets in the recent processions.”

“Write down my words, Imran Khan will get even less seats in the next election as compared to the last election,” Sanaullah Zehri pronounced.