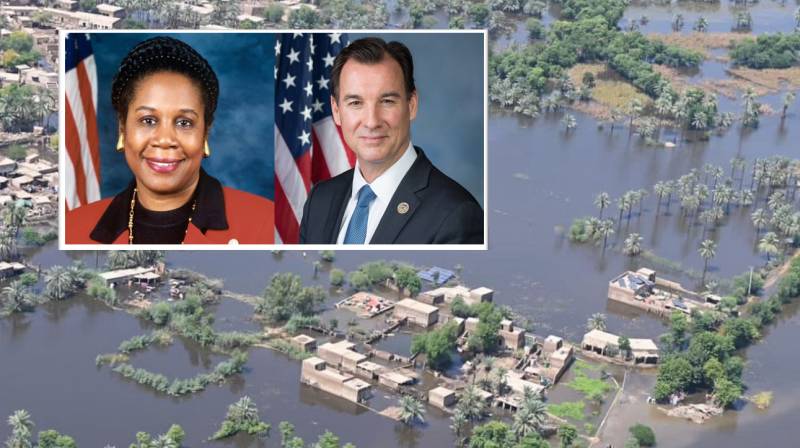 ISLAMABAD – Two members of the US Congress Sheila Jackson and Tom Suozzi arrived in Pakistan to show solidarity with the victims and survey the destruction caused by the massive flooding.

US Congress members arrived on a brief visit to flood-ravaged Pakistan as the government declared a national emergency and looking for urgent aid from the international community.

Reports in local media suggested that there was no official announcement from the US Embassy or Pakistan’s Foreign Office in wake of security reasons, while the visiting politicians are expected to meet senior Pakistani officials.

Earlier, Sheila Jackson before leaving for Islamabad wrote to US President Joe Biden, requesting provision of assistance for relief work in Pakistan.

In a social media post, US senator Tom Suozzi urged the masses to keep Pakistani people in prayers and stay tuned, saying he will report back over the next few days.

I just arrived in Islamabad, Pakistan to survey the devastation from the massive flooding impacting at least 1/3 of the country. Please keep the people of Pakistan in your prayers and stay tuned as I report back over the next few days. pic.twitter.com/IZ4Lw4rrmB

He mentioned that many of Pakistani-Americans apprised him about the devastation that has affected their friends and family. Citing a huge number of victims, he said so many more people are suffering.

UN chief arriving in Pakistan on ‘solidarity visit’ next week