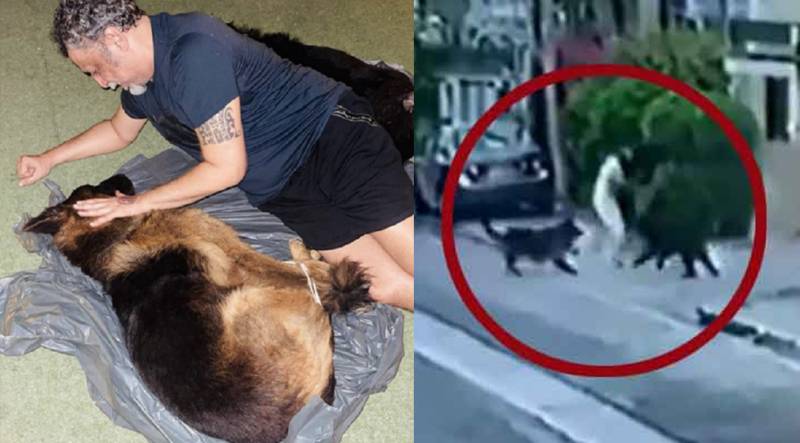 KARACHI – Two of the German Shepherd dogs involved in a horrific attack in the DHA area of Sindh capital were put down as per the agreement between the owner and the victim.

Reports in local media quoting police officials said that the canines were euthanized at a veterinary clinic. The owner of the dogs informed law enforcers.

The development came following the agreement made between Humayun Ali Khan and Mirza Akhtar. A case was registered against Khan, as earlier an Additional District and Sessions Judge South had issued directives to detain him.

Meanwhile, as per the out-of-court settlement, Khan agreed to put down the deadly pooches in a humanly way without any pain, besides donating Rs1 million to an NGO as compensation. The owner also tenders unconditional apology to Mirza for the hurt and injury caused to him.

Furthermore, Humayun Khan and his family shall not keep any dangerous or ferocious dogs as pets at their residence.

Last month, two of the giant pooches attacked Akhtar in the city's Defence Housing Authority (DHA) Phase VI area. Akhtar Ali Advocate was walking when two dogs darted towards him. The dogs, in the CCTV footage, can be seen taking a hold of a frightened Ali and tackling him to the ground.

KARACHI – Two of the canines that injured a senior lawyer in Karachi's DHA will be euthanized and not returned to ...

Another man, who appears to be the caretaker of the dogs, tries to separate the animals from Ali but to no avail.

The caretaker runs off to find another man and they both then rescue the advocate from the dogs.

The two caretakers of the dogs, identified as Fahad and Ali, had left the advocate injured on the road and left with the dogs. Police had registered a case against the dogs' owner, Humayun Khan, and nominated the two caretakers in the case as well.

KARACHI – Police in the Sindh capital have apprehended two of the dog handlers identified as Fahad and Ali after ...