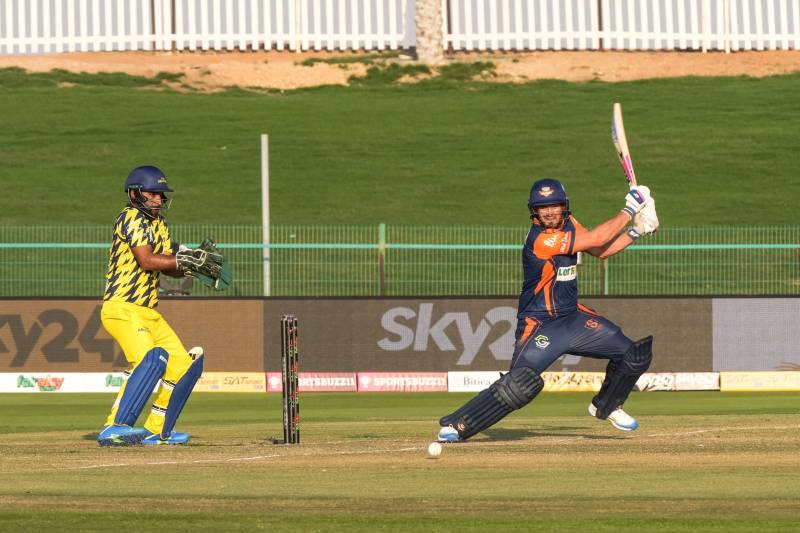 Debutants Morrisville Samp Army marched off in style by bowling out Team Abu Dhabi for a paltry 48 runs in 8.4 overs to record an emphatic 79-runs victory in the third place play-off match on the final day of the sixth edition of the Abu T10 at the Abu Dhabi Zayed Cricket Stadium. Samp Army had posted 127 for 2 through Andries Gous’s brilliant knock of 68 off 33 balls with six boundaries and five sixes.  Team Abu Dhabi’s batting cracked before the tight bowling of Samp Army. Bas del Leede and Kashif Daud bagged three wickets each backed by Akif Raja with two wickets.

Samp Army had won the toss and opted to bat. Moeen Ali, fresh from his brilliant knock of an unbeaten 78 against Deccan Gladiators in his last match on Saturday, opened with Andries Gous. The first boundary of the day was scored by Moeen off the last ball from David Payne, edging past a diving wicketkeeper Kamran Atta. In the second over, after Gous hit Peter Hatzoglou’s first delivery for a boundary over extra cover, Moeen hit the fourth ball for a six over long-off and also the fifth for another boundary over extra cover. Sixteen runs came off that over.

When Andrew Tye was introduced for the third over, Moeen hit the first delivery for a six over long-off.  Tye struck with the third ball ending Moeen’s knock by having him caught by D’Souza at deep cover for 23. Gous top edged Tye over short third man for another boundary. Amad Butt bowled a brilliant fourth over giving away only a boundary to Gous. Adil Rashid was introduced for the fifth over and Gous lifted Rashid for a straight six. At the half way mark, Samp Army was 55 for 1.

The sixth over from Fabian Allen was an eventful one. Karim Janat escaped being caught at long-off off the second ball. Gous hit the third and fourth ball for sixes, both over long-on. Gous was at his aggressive best in the seventh over. He hit Rashid for a six to deep mid-wicket and then picked a  boundary driving through extra cover and also slog swept the fifth delivery for a six. Nineteen runs came off that over.

Karim Janat hit the accurate Hatzoglou for a six over deep mid-wicket in the eight over, but Samp Army managed only nine runs off that over. In the ninth over Gous hit David Payne for two consecutive boundaries off the second and third deliveries but fell to the fourth delivery. While trying to hit across the line, Gous missed Payne’s delivery and got bowled for 68. His knock off 33 deliveries had six boundaries and five sixes.

Needing to score at over 12 runs an over, Team Abu Dhabi began their chase with their strike bowlers Fabian Allen and Adil Rashid opening the batting. Maheesh Theekshana, who bowled the first over, gave away just five runs. Adil Rashid fell to Bas de Leede to the fifth ball caught by Moeen Ali at covers for 3. Alishan Sharaful got out to the next ball caught behind by wicketkeeper Gous. Leede gave away just seven runs and bagged two wickets too.

The first ball of third over from Akif Raja to Allen sailed over the long leg fence for a six. The next ball ended Allen’s stay at the wicket when he hit Akif Raja to De Leede at deep cover for an easy catch. Allen had scored only 13 runs. De Leede then clean bowled Amad Butt with the second ball of his second over for a duck. Darwish Rasooli scored two boundaries off De Leede’s fourth and fifth deliveries. Obus Pienaar was introduced for the fifth over. He trapped Ali Abi leg before with the third ball for 2. To make matters worse for Team Abu Dhabi, Kamran Atta got run out to a fine pick up and throw by Miller to the fifth ball.  At the half way mark, Team Abu Dhabi had lost six wickets for 31 runs.

Samp Army then went for the kill through Kashif Daud. Next man Darwish Rasool got out clean bowled by Daud for 10. Daud gave away just one run in that over. Tye hit Pienaar for a six in the seventh over. Akif Raja struck with the first ball of the eighth over to have Payne out for 3 caught at deep mid-wicket by De Leede.  In the ninth over, Daud clean bowled Hatsoglou for 2 with the second ball and then had Ethan D’Souza caught behind by Gous for 2 with the fourth ball. Team Abu Dhabi was thus bowled out for a paltry 48 runs.

Player of the Match: Andries Gous