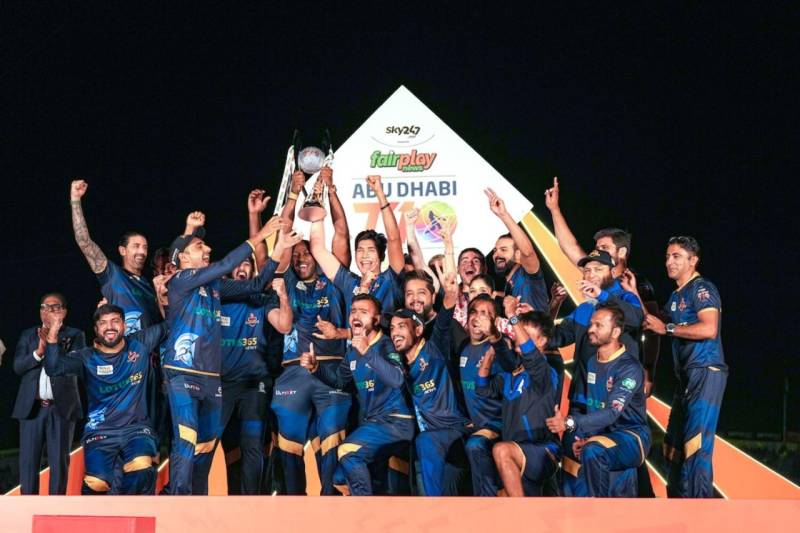 Defending champions Deccan Gladiators once again stamped their authority in the Abu Dhabi T10 by recording an emphatic 37-runs win over debutants New York Strikers in the final of the sixth edition of the Abu Dhabi T10 at the Abu Dhabi Zayed Cricket Stadium. It was a brilliant show from Deccan Gladiators who had to win the Eliminator against Team Abu Dhabi and then beat Samp Army in the second qualifier on Saturday to reach the final. By winning the final too through disciplined cricket they recorded three victories in a row to display their might in cricket’s shortest format.

New York Strikers who reached the final by topping the points table and beating Samp Army in the first qualifier could not raise their game in the final. Deccan Gladiators had posted 128 for 4 in 10 overs through David Wiese’s unbeaten 43 off just 18 balls with two boundaries and four sixes, His skipper Nicholas Pooran too scored 40 runs off 23 balls with five boundaries and a six. Pooran not only lifted the trophy but also bagged the Player of the tournament award,

Chasing the target, New York Strikers could muster only 91 for 5 in 10 overs against the tight and disciplined bowling led by Josh Little (2 for 4) and Mohammad Hasnain (2 for 14).

New York Strikers had won the toss and elected to field. Deccan Gladiators began their title defence with Suresh Raina opening with Tom Kohler-Cadmore.  Raina hit the second ball of the first over from Akeal Hosein for a boundary over extra cover but he fell to the last ball of that over. He flicked Hosein straight to Thompson at deep mid-wicket for 7.

Kohler-Cadmore hit Tom Hartley’s first delivery for a boundary over midwicket and the second delivery for a six over mid-wicket. Hosein struck with the second ball of the third over by having Kolher-Cadmore caught by Kieron Pollard at long on for 11.  It was a brilliant catch as he jumped near the fence and balanced well on one leg to complete the catch.

Andre Russell, the hero of their last match who placed Deccan Gladiators in the final through a fine knock of 63 against Samp Army in the qualifier 2 match on Saturday, began by hitting Hosein for a six to deep mid-wicket. The fourth over was a brilliant over from Rashid Khan. He gave away just three runs.

Skipper Nicholas Pooran began by hitting Wahab Riaz over extra cover for a boundary. He then hit the third delivery for a six to fine leg. The fourth delivery he picked a boundary to fine leg. With the last ball, Wahab Riaz picked the prize wicket of Andre Russell. He clean bowled Russell for 9 when he tried to hit him across the line and got a thick inside edge on to the stumps.

The sixth over was another brilliant over from Rashid Khan. He did not let Pooran and new man David Wiese  get any boundary and gave away just seven runs. The seventh over from Jordan Thompson was also bowled well. Except for Pooran hitting the first ball for a boundary, the rest of the deliveries were bowled tight.

Wiese made up for all the good overs by top edging the first ball of the seventh over from Wahab Riaz for a six to third man. The third ball was flicked for a six and fourth too went for another six to over long-on. Wiese ended the over hitting a boundary past backward point to take 24 runs off that over.

Pooran too did not spare Thompson and hit a boundary to deep point. When Wiese too hit Thompson over point for a boundary, Deccan Gladiators’ score went past the 100-run mark. Thompson gave away 17 runs from the ninth over. Wiese hit Pollard’s first delivery of the last over for a six to over long-on. Pollard prevented the batsmen from hitting any more big shots. He also got Pooran out to the last ball of the innings, caught by Matiullah Khan for 40.  Wiese remained unbeaten on 43 and Deccan Gladiators thus posted a challenging 128 for 4 in 10 overs.

New York Strikers needed to score at a run rate of 12.80 and they needed a good start. Josh Little gave Deccan Gladiators a good start by clean bowling opener Muhammad Waseem for a duck. Waseem going for a drive, inside edged the delivery onto his stumps. Stirling hit Mohammad Hasnain’s first ball of the second over for a huge six over mid-wicket but fell to the second ball.  Kohler-Cadmore at deep square leg took the catch as Stirling flicked in the air to be out for 6.

Azam Khan began by hitting Hasnain for a boundary to deep square leg. Hasnain struck again with the fifth ball, taking the valuable wicket of Eoin Morgan. Going for a shot over mid-off, Morgan failed and landed up being caught by Wiese for a duck. The third over from Odean Smith was a disciplined one giving away just five runs. In the fourth over, Azam Hit Zakir Khan for a boundary to square leg. He then hit the next delivery for a six to deep mid-wicket.  He tried to hit the third ball too for a six but could not clear Wiese at long on and got caught for 16.

Skipper Kieron Pollard walked in and hit Zakir Khan for two consecutive sixes. Both of them  were hit over mid-wicket. Twenty-two runs came off that over. Odean Smith bowled the fifth over and Thompson picked two boundaries off his fifth and sixth deliveries. New York Strikers were 52 for 4 at the half way stage, needing 77 runs from the last five overs.

All eyes turned towards Pollard, who hit Zahoor Khan’s third delivery for a boundary to wide of the long-on fielder. Thompson too hit Zahoor to deep mid-wicket for a boundary off the fifth ball. Thirteen runs were scored off that over. Hasnain bowled a brilliant seventh over giving nothing away but just three runs and that almost titled the match the Deccan Gladiators way.

Sixty-one runs needed off the last 18 balls, Zahoor too bowled brilliantly. When New York needed another 52 runs off 14 balls, Pollard retired hurt due to serve pain in his biceps. He had hit 23 runs from 15 balls with one four and two sixes. Though Rashid Khan hit Zahoor’s last delivery for a boundary, Zahoor gave only 10 runs off that over.

With 51 runs needed off the last 12 balls, Little was re-introduced for the ninth over. He too strangled the run flow with his accurate swing and change of pace and also got Rashid Khan out for 8. Hosein hit Zakir Khan’s second delivery of the last over for a six over long-off but the target was unreachable. Deccan Gladiator won by 37 runs.

Player of the Match: David Wiese.

Player of the tournament: Nicholas Pooran