Another American citizen hunts markhor in Gilgit after paying US$ 110,000 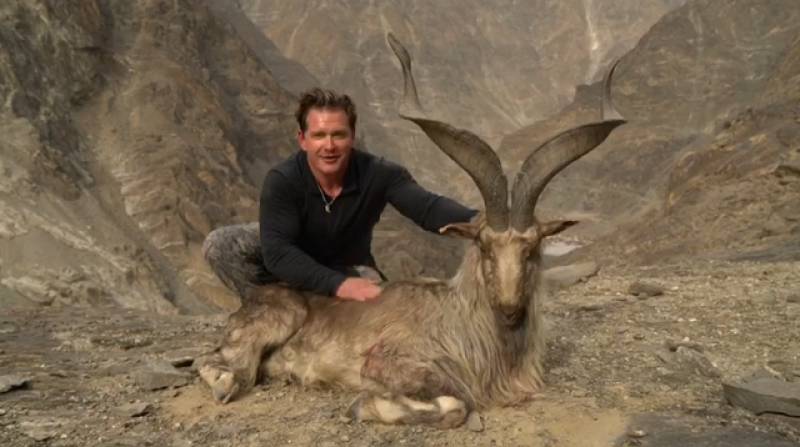 GILGIT – Another American citizen has hunted the highest-priced markhor in Sassi village of Gilgit on Monday.

The US hunter, Bryan Kinsel Harlan, had paid a record 110,000 US dollars (the highest permit fee ever offered in the country) as permit fee for hunting Pakistan's national animal in Gilgit-Baltistan.

According to the Gilgit-Baltistan wildlife department, the US citizen successfully hunted a flared-horned markhor from Sassi-Harmosh community conservation area during the 2018-19 hunting season.

The foreign hunter managed to hunt a 41-inch markhor trophy, which is considered a good-sized trophy.

CHITRAL – A hunter from USA, who had arrived in Pakistan through a helicopter for hunting Markhor in the limits of ...

On Jan 21, a US citizen Dianda Christopher Anthony had paid the sum of 105,000 US dollars to hunt the highest-rated Astore Markhor.

On Jan 16, another American, John Amistoso, had hunted the Astore Markhor in the community-controlled Bunji area of Gilgit, paying the 100,000 US dollars permit fee.

So far, the national and foreign hunters have hunted 50 rare wildlife species in the Gilgit Baltistan region under trophy hunting season 2018-19.

CHITRAL – Two hunters from USA and Switzerland have arrived in Pakistan through a helicopter for hunting of Markhor ...

Up to 80 per cent of the money generated from issuing markhor hunting permits is shared with the local community, which works to prevent illegal hunting of the animal.