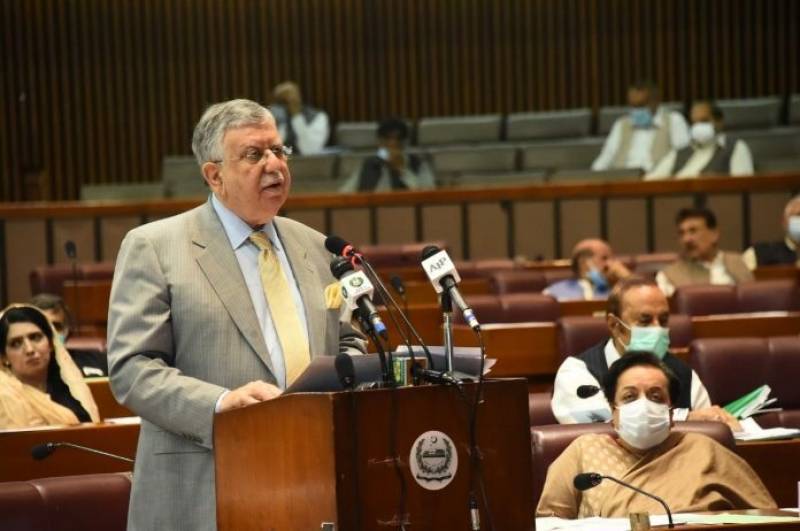 ISLAMABAD – Federal Minister for Finance and Revenue Shaukat Tarin on Tuesday tabled the supplementary finance bill in the Senate that plans to end exemptions as part of fiscal tightening measures aimed at getting loans from the global lender.

Incumbent officials struggled to continue the Senate session amid the mayhem and frequent walkouts by the opposition lawmakers, forcing the chair to postpone the proceedings until Friday amid lack of quorum.

Tarin tabled the Finance Amendment Bill, which was referred to the relevant standing committee while the chair directed the committee to present its report to the house within three days.

Amid uproar from opposition benches, Pakistan Peoples Party (PPP) Senator Raza Rabbani slammed the govt move saying people wanted to know what decisions were being taken at the behest of the International Monetary Fund (IMF) and the United States.

Rabbani said the finance supplementary bill was presented on the IMF's instructions and would lead to a further increase in the prices of gas and electricity.

The government had introduced both the bills in the National Assembly, and the IMF had moved the 6th tranche recommendation to its board for consideration on January 12, Finance Ministry said.

The supplementary finance bill seeks to amend certain laws on taxes and duties to meet the International Monetary Fund's (IMF's) conditions for the clearance of Pakistan's sixth review of the $6 billion Extended Fund Facility (EFF), paving way for the disbursement of a tranche of around $1 billion.

The bill will empower the government to level a uniform 17 percent GST on goods that were taxed at 5 percent or 12 percent rates. The amendment will also enable the government to generate over Rs343 billion in additional revenue.

The South Asian country had been in talks with the IMF for several months to seek relaxation in the terms and conditions of the package however economists said the measures introduced by the PTI government will trigger inflation.

Earlier, the leader of the opposition in the National Assembly Shehbaz Sharif termed the mini-budget as a ‘death knell’ for Pakistan, while PPP chairman Bilawal Bhutto called it an anti-public budget.