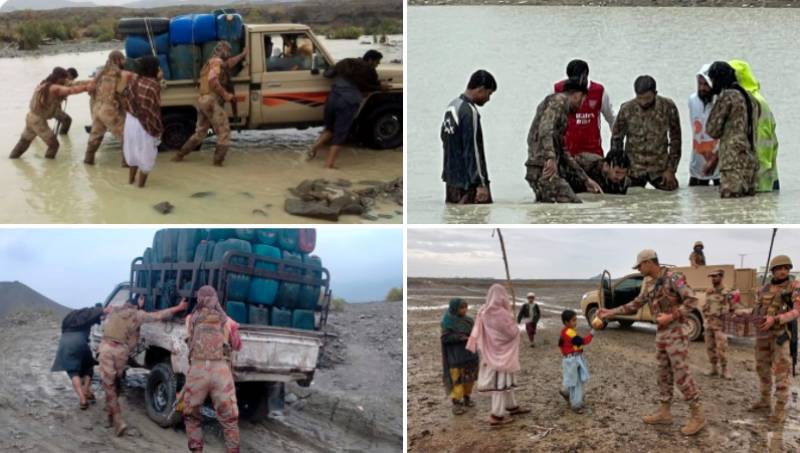 QUETTA – Following flash flooding in coastal areas of Balochistan, Pakistan Army along with other forces stepped in to assist the civil administration in rescue and relief operations.

Reports in local media said heavy rains have been brought by a strong westerly wave that has entered the western and upper parts of the country which left several parts in Balochistan inundated.

A statement issued by Inter-Services Public Relations (ISPR) said the Army troops immediately assisted civil administration in rescue and relief efforts including dewatering of various areas and shifting of stranded tourists and their vehicles in flooded areas to safer places.

It also added that the stagnant water accumulated in the port city of Gwadar was posing extreme problems for the local population and tourists.

Homes in low-lying areas were damaged in Dasht Bilingor, Dalesar, Balkross, and Kashyap while several walls collapsed in wake of heavy rains. Heavy machinery was used to clear roads and deliver relief supplies to the affectees.

Pakistan Coast Guards also stepped in to assist locals at Jiwani, Pishukan, and Gwadar city in removing water from streets and houses and shifting fishermen's boats to safer locations.

Clips on social media showed uprooted trees while residents are wading through knee-deep water to get essential commodities. Pakistan Metrological Department (PMD), said the highest rain of 137mm was recorded in Pasni, 104mm in Gwadar, 74mm in Ormara, 44mm in Turbat and 40mm in Jiwani.

ISLAMABAD – The Pakistan Metrological Department (PMD) said that a cold wave is likely to grip the country in the ...

Meanwhile, the emergency was imposed by the local administration in Gwadar. Many residents have also reported outages of natural gas and power in different areas.

Intermittent rain in Karachi and other parts of Sindh

The new weather system has also brought rain to the country’s largest metropolis Karachi and other Sindh cities. In Karachi, the second rain spell of the winter began with a drizzle that continued late into the night with intermittent showers at some places.

KARACHI – The country’s seaside metropolis woke up to rain on Monday morning while cloudy conditions ...