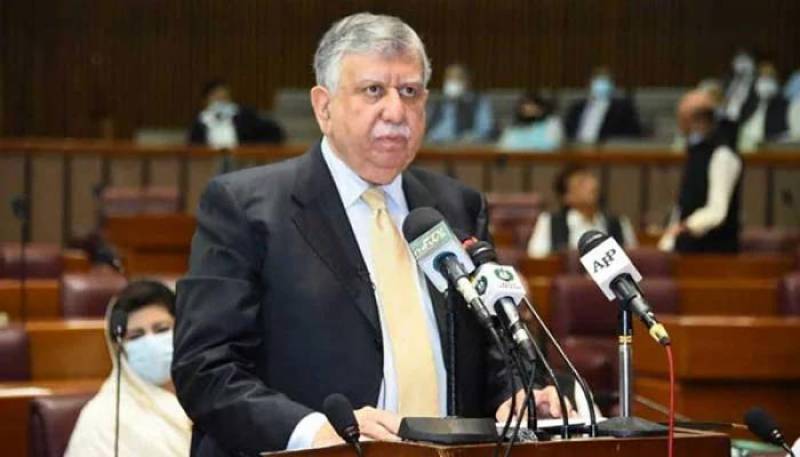 ISLAMABAD – Federal Minister for Finance Shaukat Tarin on Thursday tabled the supplementary finance bill, which is being termed as a mini-budget by the Opposition, in the National Assembly in a bid to revive the International Monetary Fund’s (IMF) loan programme.

The Opposition massively protested against the bill and chanted slogans to interrupt Shaukat Tarin when he also presented SBP Amendment Bill in the lower house of the Parliament.

The finance bill was originally scheduled to be presented on Wednesday but it had been delayed by the cabinet to seek more discussion on it.

Speaking on the occasion, PML-N leader Khawaja Asif said that the supplementary bill will give the reins of SBP in the hands of IMF. “Don't sell Pakistan,” he urged the government.

While referring to East Pakistan separation, he warned that surrendering economic sovereignty of the country is more dangerous than that of the surrender in 1971.

'Burden of Rs2 billion will be imposed on common people'

Talking to the media after the NA session, Tarin rejected the impression that the supplementary finance bill would put the burden on the common man, adding that it is just aimed at reviewing tax exemptions worth Rs342 billion.

He said tax exemptions worth just Rs2 billion will be reviewed under this bill that is concerned with the common man.

Tarin said no sales tax has been imposed under the bill on tractors, medicines and fertilizers.

He said top priority of our government is to strengthen institutions by making them independent.

The Minister said under the State Bank of Pakistan (Amendment) Bill 2021, the SBP will be held accountable to Parliament, strengthening the country's law making institute.

He said our government has not borrowed a single rupee from the State Bank during the last two and a half years.

ISLAMABAD – PTI government is all set to table a mini-budget before Parliament tomorrow (Monday) to meet the ...