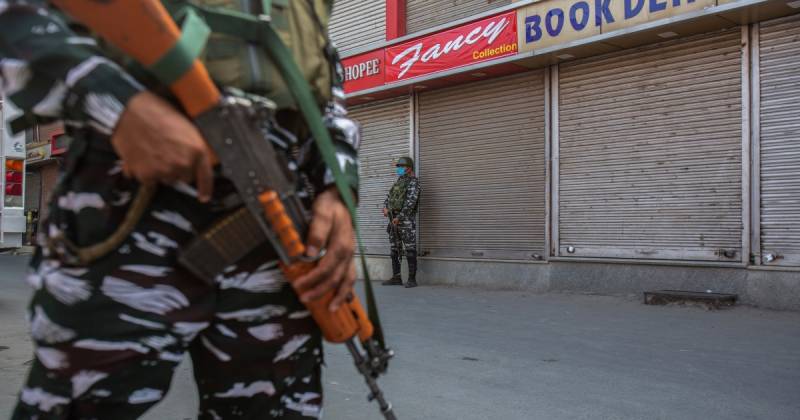 SRINAGAR – Occupation forces in Kashmir have shot dead six people and lost one soldier in a series of raids amid appeals by local leaders to the international community to stop India from changing the demographic character of Muslim majority region.

According to Indian officials, one gunfight broke out in Kulgam district and the other in Anantnag district – both in south Kashmir – during cordon and search operations.

A police statement issued Thursday said one of the four government forces personnel wounded in the clashes died of bullet injuries in a hospital.

Separatist groups have been fighting Indian forces for more than 30 years, demanding freedom for the region or its merger with neighbouring Pakistan, which also controls a part of the region.

Officials say at least 380 rebels, nearly 100 civilians, and more than 80 security forces personnel have been killed in the region since August 2019 when New Delhi stripped the disputed region of its autonomy that added to anger among locals and galvanising support for self-determination.

This year, the death toll was 264, compared with 321 in 2020, according to the South Asia Terrorism Portal.

Thursday's killings come amid criticism from Jammu and Kashmir Hurriyat Party and other opposition groups on India’s recent move to allow non-Kashmiris to buy land, saying New Delhi had put up Jammu and Kashmir on sale.

In a statement earlier this week, Kashmir’s All Parties Hurriyat Conference – headed by incarcerated Mirwaiz Umar Farooq – said it has “strongly appealed to the international community to take cognisance of the systemic demographic change being foisted upon Muslim majority Jammu & Kashmir, by settling outsiders here including through a new policy of sale of land and natural resources to them.”

APHC said that the Indian government wants to change the demographic character of Muslim majority J&K and disempower its residents. It said the measures were aimed at scuttling “the final resolution of the long standing international political dispute of Kashmir in accordance with the will and aspirations of its people as promised by the international community, based on principles of justice and international law.”

India has an estimated 500,000 soldiers deployed in the occupied state of Jammu and Kashmir.