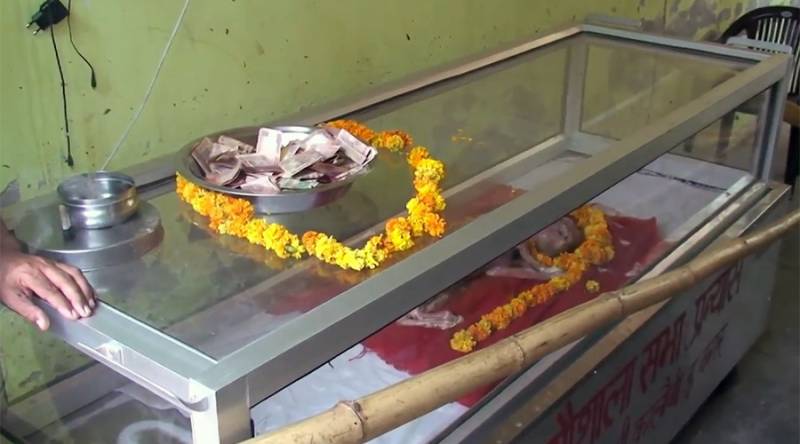 MUZAFFARNAGAR - A deformed calf born with human-like features is reportedly being treated as a representation of the Hindu god Vishnu in a village in northern India.

The bull calf was born in the village of Pachenda, Muzaffarnagar, in the state of Uttar Pradesh. The bizarre creature has very peculiar features, including an almost human-like mouth, ears and nose.

The deformed animal died shortly after birth, but has been placed on display and people have been flocking to visit the unusual animal.

Reports in local media say the calf is being hailed as an incarnation of Lord Vishnu. Video footage obtained by Ruptly shows crowds of people gathering to look at the animal, which is in a glass display case with flowers garlanded around its neck. Cows are considered sacred in India in accordance with Hindu beliefs.

Many of the visitors are taking videos of the animal with their phones, while a plate for donations on top of the case is seen overflowing with banknotes.

India.com reports that thousands of people have been to see the calf, and that there are plans for a temple to be built in its honor after it is cremated.

However Ajay Deshmukh, of Wildlife SOS, explained to NaiDunia that the bizarre creature was not a miracle, but rather a victim of birth defects.

“Sometimes in the womb, some organs of the body... are not fully developed, due to which they are born with a strange appearance or face," Deshmukh said.