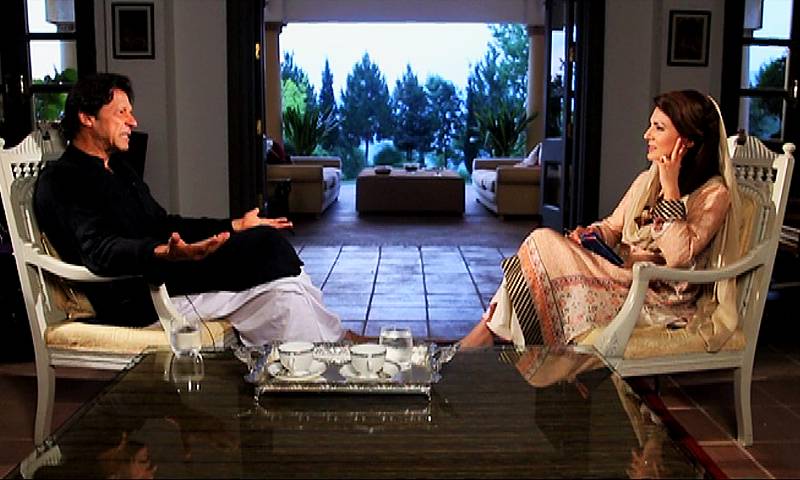 LAHORE - Reham Khan, the former wife of Pakistan Tehreek-e-Insaf Chairman, Imran Khan, has claimed that one of Khan's sisters referred to him as 'Haram Khan' in an exchange of text messages.

In the manuscript of the book to be released soon, Reham Khan shares an incident from the 2014 sit-in when she was handed a phone which was open on a text from Imran's sister Aleema.

The text was received on a phone belonging to Imran's other sister Rubina and it read: ’Haram Khan is here, looking victorious and the PTI girls have sat her in the front row’.

Reham claimed that Imran Khan considered his sister Rubina a bitter spinster who bullied Khan 'for his looks and lack of intellect'.

"Imran told me that the family worried about him because he was a bit of dunce," wrote Reham in the purported book.

"Imran would often make fun of Aleema and her political aspirations. She thinks she is bloody Fatima Jinnah," stated Reham Khan.

She continued that in front of Imran, Aleema said quite clearly to her that he was not a brother to her.

"He is a commodity. We have to get where we want with him. So I don't think of him like a sister would," Reham quoted Aleema Khan as saying.

Reham also drew a comparison of Imran's association with her sisters to that of her relationship with her own brother and said her brother was this gentle being who had no ability to say anything nasty about any woman, especially his own sister.

"Even when we disagreed, we would not resort to such distasteful comments, so it was certainly a shock to hear it from Imran,," Reham wrote in the book.

Apart from Imran's sisters, Reham Khan also opened up about the sons of the cricketer-turned-politician, portraying them in a bad light.

"It was Suleiman that disturbed me the most. I had never seen such a sad looking boy. He was nervous and unsure of himself, and I didn’t see him smile once the entire evening," penned Reham in the book.

Once again, Imran's former wife drew a comparison of her son with that of Imran and explained that Sahir was sitting next to Imran and talking confidently, which made 'Suleiman look even more uneasy'.

"He kept looking for his father to turn his face to him and give him attention. He hardly spoke. I wanted to get up and give the poor boy a hug," noted the TV anchor in the book and added that the kid had clearly had a very different upbringing to any of her.

Regarding Qasim Ali Khan, Reham shared that Jemima had been on the phone after discovering cannabis in his jacket. She also claimed that as per Imran Khan, Qasim was doing weed with Jemima's brother, the boy's own uncle.

Reham Khan also shared another chilling incident when a lady begged for mercy from the PTI chief.

"Mujhay zaleel mut kero (Don't insult me). Let me go with me decency. You want to wait till the 30th of November, 30th of December, 30th of March. I won't say a word until you want. Just end it now," highlighted Reham without mentioning who the lady was.

Reham then shares that Imran Khan came over to her and touched her feet and said:

Imran's former wife observed that the words shocked her following which she drew the line here.

"I have had doubts put in my mind but I needed this. Never again will I think like this again. Give me one last chance, please. I don't know what came over me. Please forgive me." wrote Reham Khan.

Imran's Smile Over Ending the Sit-in

In her sensational book - a manuscript of which is only available to a very few individuals - Reham Khan has also shared that when the 2014 sit-in ended, Imran smiled, a gesture which Reham says she will never forget.

"Baby the Dharna is over. Thank God!," Imran reportedly said to Reham which riled her.

The author then shares that Imran's grin moved her to thought: Have I married a man who thinks of people as collateral?” but she fell shy of asking it directly.

"But Imran, it’s the most dreadful news ever!” Reham cried out following which Imran Khan changed his expression and immediately became serious.

"Oh yes, it's dreadful! They showed it to us all. The bodies all piled up on top of each other", in a reference to the victims of Army public School Peshawar massacre.

The book is expected to be launched in next few days in London, however, famed actor Hamza Ali Abbasi claims to have read the manuscript of the book; he is sharing the content on antional media as well.

Even before the launch of the autobiography, Reham Khan has been sued by former skipper Waseem Akram, Imran's friend Zulfi Bukhari, Reham's former husband, and Anila Khawaja for writing 'salacious' content in the book.