Knife-wielding attacker slashes face of US ambassador in South Korea 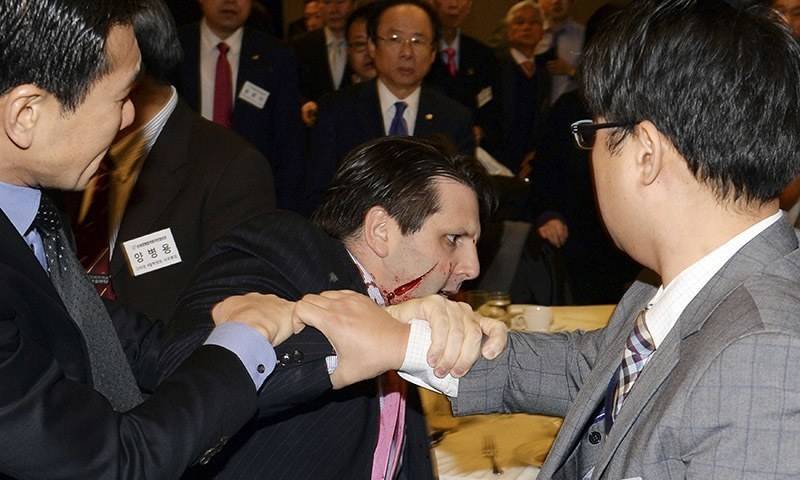 SEOUL (APP) – US ambassador to South Korea Mark Lippert underwent two-and-a-half hours of surgery after he was slashed in the face by a Korean nationalist in an attack at a breakfast forum in Seoul on Thursday to discuss Korean reunification.

Lippert, 42, was bleeding from deep wounds to his face and wrist but was able to walk after the attack. Doctors said later his condition was stable after a “very successful” surgery that required 80 stitches in his face.

The assailant was caught and identified by police as 55-year-old Kim Ki-jong. In 2010, Kim tried to attack the Japanese ambassador to South Korea by throwing a piece of concrete and was given a suspended jail term, according to police.

The attack was a protest against joint military exercises by South Korean and US troops, which Kim said interfered with reconciliation between North and South Korea, according to police following an interrogation. Police are considering whether to charge him for attempted homicide, a police official involved in the case said.

Witnesses and police said Kim used a small fruit knife in the attack, which took place in a government arts centre across the street from the heavily guarded US embassy on the South Korean capital's main ceremonial thoroughfare.

The assailant was dressed in traditional Korean clothing and shouted that North and South Korea should be reunited just before he attacked Lippert. He also shouted that he opposed “war exercises”, a reference to the annual joint US-South Korean military drills that began this week.

Kim visited North Korea eight times from 2006 to 2007, where he planted trees near the border city of Kaesong, a South Korean Ministry of Unification official said.

“I carried out an act of terror,” Kim shouted as he was pinned to the floor by people at the event.

Kim said while in police custody he had acted alone. South Korea's Yonhap news agency reported that Kim also said he was part of a group that had cut and burned a US flag on the embassy grounds in Seoul in 1985.

Kim is a member of the group that supports Korean unification that hosted the event, police said. He has also staged one-man protests against Japan over disputed islands known as Dokdo in Korean and Takeshima in Japanese, and, according to his blog, he led a protest outside a US army base in Seoul last November.

“The guy comes in... he yells something, goes up to the ambassador and slashes him in the face,” witness Michael Lammbrau of the Arirang Institute think-tank told Reuters.

Doctors at Yonsei University's Severance Hospital said they treated Lippert for a 4 inch gash on the right side of his face and a puncture wound on his left wrist, causing nerve damage that was repaired. He will be hospitalised for three or four days, they said.

“Doing well & in great spirits!,” Lippert tweeted after his surgery.

North Korea's official KCNA news agency described the attack as “deserved punishment for the warmongering United States”, calling it “the knife of justice” that it said reflected the anger of South Koreans opposed to the military exercises involving South Korean and US forces.