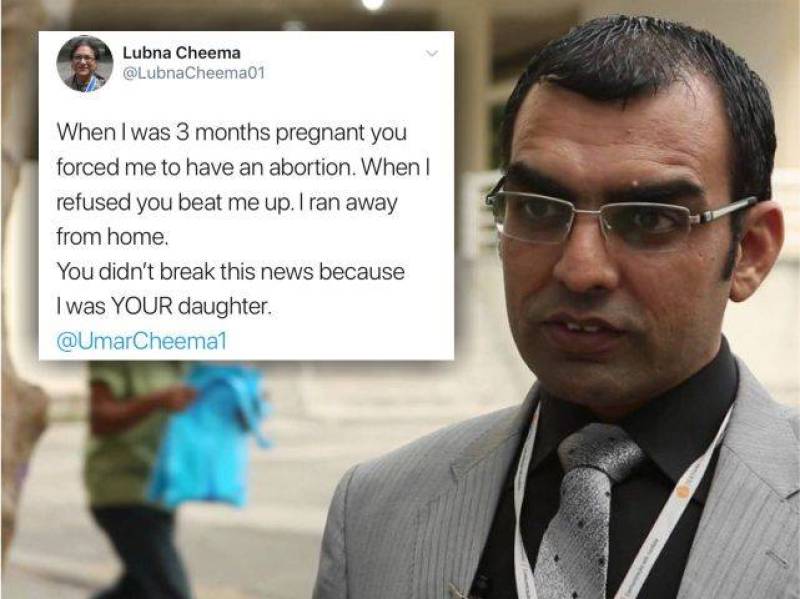 LAHORE - On Monday morning, people in Pakistan woke up to see a story on Imran Khan in which Umer Cheema – the same investigative reporter who first broke the marriage’s news – claimed that the PTI chief contracted marriage before the completion of Bushra Maneka’s iddat.

Hours later, Cheema found himself at the centre of an embarrassing social media storm followed by a fake trend - #LubnaCheemaPregnancy.

Through the fake Twitter handles of Umer Cheema and his non-existing ‘daughter’, somebody tried to malign the reporter claiming the ‘woman’ was expecting a child out of wedlock.

They thought everybody has illegitimate child. Shameless cowards. Masters of fakery. pic.twitter.com/hb9XaGk7UB

It quickly became a top trend on Twitter, triggering a barrage of jokes on social media.

Lubna cheema got viral in Pakistan thanks to @UmarCheema1 ...she doesn't look pregnant pic.twitter.com/vLyFAiatYe

Some people saying this is Lubna Cheema (Umar Cheema's daughter) but they are wrong because she is Maryam Nawaz daughter of ex disqualified PM.#LubnaCheemaPregnancy

To clarify, Umer Cheema has no daughter by the name of ‘Lubna’.

Responding to the shameful trolling, the reporter issued an online warning, which states: “All those busy in hurling abuses through phone calls/social media after the appearance of my story, are being noted. They will be reported to FIA Cyber Crime Wing for further action.”

WARNING: All those busy in hurling abuses through phone calls/social media after the appearance of my story, are being noted. They will be reported to FIA Cyber Crime Wing for further action.

#PTI claims the ones circulated my phone/email details on twitter and Facebook are not from #PTI. However, all the hate calls I received were from #PTI supporters. What a coincidence.

Cheema’s colleagues, Waseem Abbasi and Ahmed Noorani also jumped in the controversy to find a clue of online perpetrators and pointed the finger at PTI social media workers (or Insafians).

This is the handle renamed by PTI’s trolls to defame Umar..Cheema has no daughter by this name..you can search this handle on Twitter & you will get PTI’s Lubna..#Lies pic.twitter.com/gq20FgGTXe

This twitter handle @LubnaCheema01 is brainwork of #PTI social media which is throwing dirt instead of responding to story contents. @UmarCheema1 has no daughter by the name of Lubna.

Umer Cheema is an analyst and journalist currently working with The News, and has also worked for ICIJ and appreciated for his work.

Most of the PTI social media users have condemned this trend:

Many criticised Umer Cheema and the propagandists equally:

A low life scum getting a taste of how even lower life scum resort to slander. How very pathetic. #UmarCheema #LubnaCheema

This tweet from lubna is obviously a fake account, its pretty much possible umer cheema created this account himself to blame pti and imran khans fans. cheema is defo in talks today!