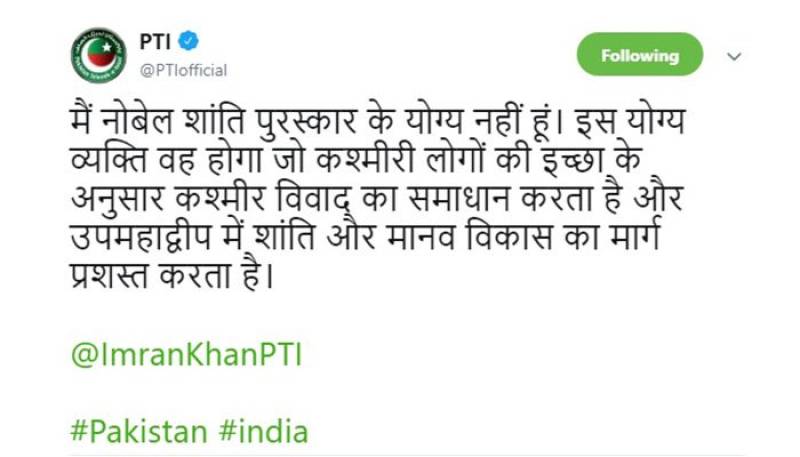 LAHORE -On Monday (yesterday), The Pakistan Tehreek-e-Insaf (PTI) official handle tweeted in Hindi to reach Indians on Twitter and people are going crazy over it.

The tweet in Hindi was a translation of Prime Minister Imran Khan’s tweet stating he was not worthy of the Noble Peace Prize and the person qualified for the award would be the one who resolves the Kashmir dispute.

Following the prime minister’s announcement to release the captured Indian pilot Abhinandan, #NobelPrizeforImranKhan had become a top trend on Twitter, while this announcement also made headlines in newspapers and TV channels across the globe.

The last few days have proven to be both tensed and interesting, with the tension on the border between two countries, ...

Fans of Imran Khan from all around the world launched a campaign calling to declare the chairman Pakistan Tehreek-e-Insaf (PTI) an ambassador of peace.

Let's have a look at some of the reactions to PTI's Hindi tweet:

If you were trying to appeal to your India assets you should have translated it in Bangla.

Brothers its ok as we have many Indian friends who read this & are impressed. No problem in language even in hindi we should use all ways of communications & in all the languages