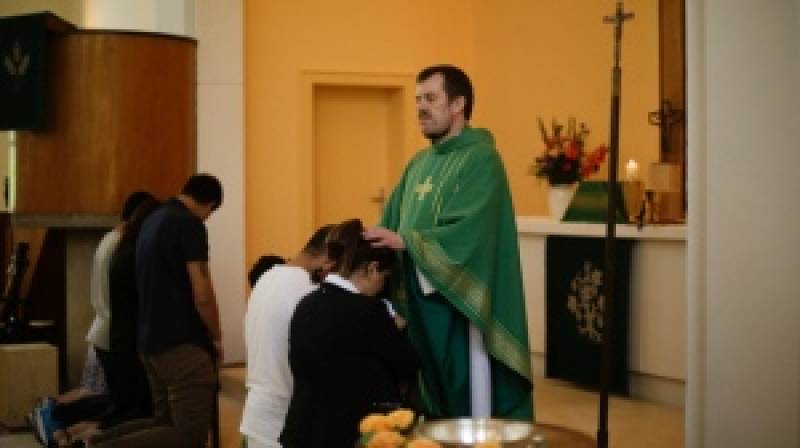 "Yes," Zonoobi fervently replies. Spreading his hands in blessing, Martens then baptizes the man "in the name of the Father, the Son and the Holy Ghost."

Mohammed is now Martin -- no longer Muslim, but Christian.

Zonoobi, a carpenter from the Iranian city of Shiraz, arrived in Germany with his wife and two children five months ago. He is one of hundreds of mostly Iranian and Afghan asylum seekers who have converted to Christianity at the evangelical Trinity Church in a leafy Berlin neighbourhood.

Like Zonoobi, most say true belief prompted their embrace of Christianity. But there's no overlooking the fact that the decision will also greatly boost their chances of winning asylum by allowing them to claim they would face persecution if sent home.

Martens recognizes that some convert in order to improve their chances of staying in Germany -- but for the pastor motivation is unimportant. Many, he said, are so taken by the Christian message that it changes their lives. And he estimates that only about 10 per cent of converts do not return to church after christening.

"I know there are -- again and again -- people coming here because they have some kind of hope regarding their asylum," Martens said. "I am inviting them to join us because I know that whoever comes here will not be left unchanged."

Being Christian alone does not help an applicant, and Chancellor Angela Merkel went out of her way this week to reiterate that Islam "belongs in Germany."

But in Afghanistan and Iran, for example, conversion to Christianity by a Muslim could be punished by death or imprisonment, and it is therefore unlikely that Germany would deport converted Iranian and Afghan refugees back home.

None will openly admit to converting in order to help their asylum chances. To do so could result in rejection of their asylum bid and deportation as Christian converts. Several candidates for baptism at Martens' church would not give their names out of fear of repercussions for their families back home.

Most said their decision was based on belief, but one young Iranian woman said she was convinced most people had joined the church only to improve their chances for asylum.

Congregation member Vesam Heydari initially applied for asylum in Norway and converted there in 2009. But his case was rejected because the Norwegian authorities did not believe he would be persecuted as a Christian in Iran, so he moved to Germany to seek refugee status here -- and is awaiting a decision.

He criticized many of the other Iranian church members, saying they were making it much harder for "real, persecuted Christians" like himself to get approved for asylum.

"The majority of Iranians here are not converting out of belief," Heydari said. "They only want to stay in Germany."

Meanwhile, as other churches across Germany struggle with dwindling numbers of believers, Martens has seen his congregation swell from 150 just two years to more than 600 parishioners now -- with a seemingly unending flow of new refugees finding the way to his congregation.

Some come from cities as far away as Rostock on the Baltic Sea, having found out by word-of-mouth that Martens not only baptizes Muslims after a three-month "crash course" in Christianity, but also helps them with asylum pleas.

Other Christian communities across Germany, among them Lutheran churches in Hannover and the Rhineland, have also reported growing numbers of Iranians converting to Christendom.

There are no exact numbers on how many Muslims have converted in Germany in recent years -- and they are a tiny minority compared to the country's overall 4 million Muslims. But at least for Berlin, Martens describes the number of conversions as nothing short of a "miracle."

And he says he has at least another 80 people -- mostly refugees from Iran and a few Afghans -- waiting to be baptized.

Germany is witnessing an unprecedented surge of asylum-seekers this year, with the number of migrants expected to reach 800,000 this year, a fourfold increase on last year.

Many of the new arrivals come from Muslim countries such as Syria, Iraq, Afghanistan or Pakistan. While refugees from civil-war-torn Syria will almost definitely be receiving asylum status, the situation is more complicated for asylum seekers from Iran or Afghanistan, which are seen as more stable.

In recent years, roughly 40-50 per cent from those two countries have been allowed to stay in the country, with many of those getting only temporary permission to remain.

Germany's Federal Office for Migration and Refugees said it does not comment on the reasons individual applicants give when they apply for asylum, or on how many people receive refugee status in Germany based on religious persecution.

Zonoobi, who dressed all in white for his baptism on Sunday, said he had attended secret religious services in Iran ever since friends introduced him to the Bible at age 18. He decided to flee to Germany after several Christian friends were arrested for practicing their religion.

For Zonoobi and his wife Afsaneh -- who since her baptism goes by the name of Katarina -- the christening marks a new beginning.

"Now we are free and can be ourselves," she said. "Most important, I am so happy that our children will have a good future here and can get a good education in Germany."