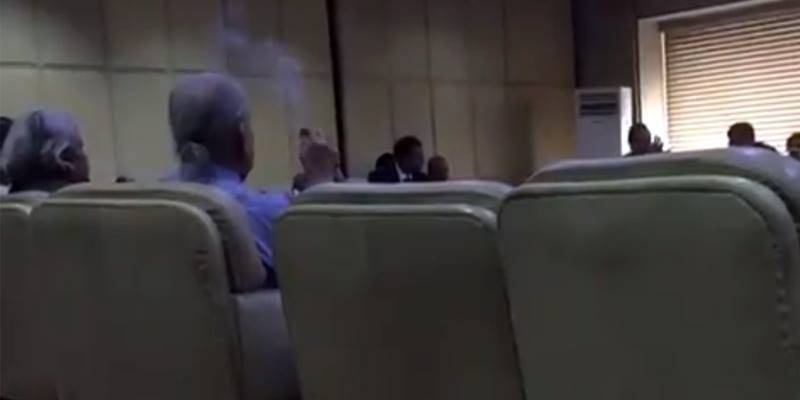 ISLAMABAD - Senator Raza Rabbani, a stalwart of Pakistan Peoples Party, caught smoking a cigar at a public place during an official meeting of Senate’s standing committee, violating the law.

A journalist Zameer Haider on his Twitter handle shared a video of the senator, stating that Rabbani was smoking fearlessly at the high-level meeting of the Senate body on Rules, Procedures and Privileges.

Sen Raza Rabani violated law by smoking cigar in Senate standing committee of Rules, Procedures & Privileges on Monday without realising that Parliament, where he is a sitting Senator & had steered Upper House as Chairman, enforced the law for protection of health of non smokers. pic.twitter.com/LPZtmf8dTn

Rabbani, who had also been heading the Upper House of the Parliament as Chairman, smoked cigar without caring that the Parliament where he is present had once approved a law for the protection of the health of non-smokers.

An interesting thing is that no any member of the committee raised objections over the action of Senator Rabbani.

The Section 5 of the Prohibition of Smoking and Protection of Non-Smokers Ordinance 2002 specifically states, "No person shall smoke or use tobacco in any other form in any place of public work or use.

The Section 11 of the Ordinance imposes a fine extending to Rs1,000 in the case of a first time offender.