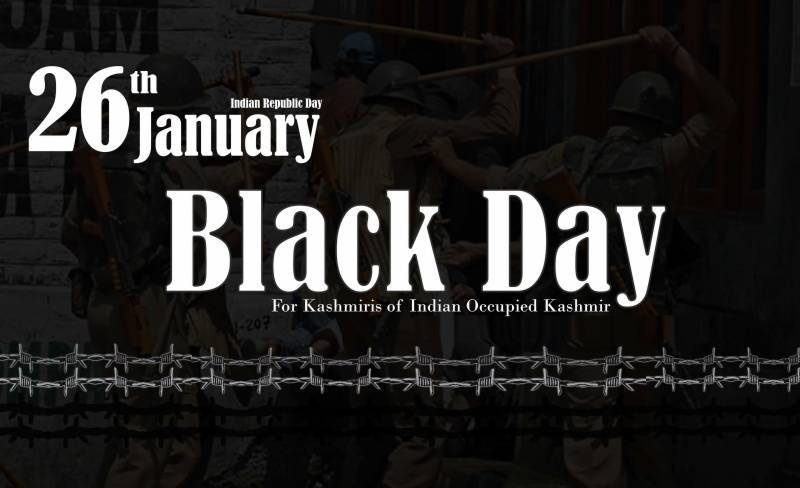 SRINAGAR – Kashmiris on Thursday observed the Indian Republic Day as a Black Day on a call given by the All Parties Hurriyat Conference.

A report by Kashmir Media Service said the oppressed citizens of the disputed Himalayan valley and Kashmiris across the world observe India’s Republic Day as Black Day, in another bid to highlight the plights of Kashmiris under the Modi-led government.

The day take observed in wake of New Delhi’s continued denial of the right to self-determination to the Kashmiri people.

January 26 will be marked by a complete strike in Indian-occupied Jammu and Kashmir and anti-India demonstrations and rallies in Azad Kashmir, while Kashmiris will march into world capitals to give a strong message to the world that the Kashmiris consider India as a usurper of their fundamental rights.

In massages and posters, Hurriyat leaders including Ghulam Nabi War, Khadim Hussain, Sibte Shabbir Qummi, and Jammu and Kashmir Liberation Front urged Kashmiris to boycott all Indian official celebrations and hoist black flags on the rooftops of their houses, shops and other buildings.

Meanwhile, inhumane measures in the name of security have been taken in occupied Kashmir, bringing more misery to the already besieged people in IIOJK.

Besides the stringent measures, the local law enforcers also detained four youth during crackdown operations and house raids in the Surankote area of the Poonch district under fabricated cases.