Bernie Sanders presented with Sindhi Ajrak for his pro-Kashmir stance 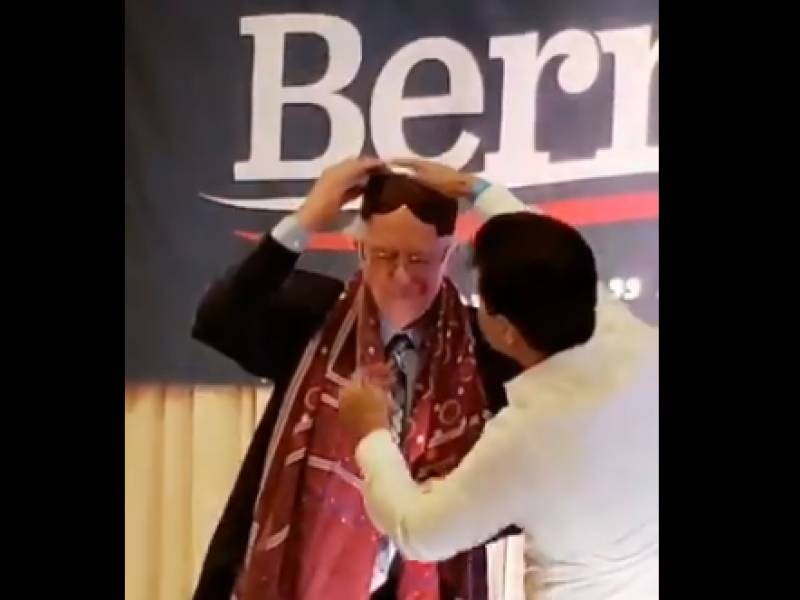 LAHORE- In a widely circulating video on social media, the US presidential candidate Bernie Sanders is seen wearing a Sindhi Topi and Ajrak, gifted to him by a Pakistani man.

Sanders was presented with this honour during his campaign at Houston.

The Senator from Vermont had earlier spoken against the ongoing unrest in Indian-occupied Kashmir, it was a gesture in recognition of his pro-Kashmir stance.

US Senator Bernie Sanders said on Sunday that India’s move to annex occupied Kashmir was “unacceptable”, calling on the BJP government to lift the curfew in the disputed valley.

"India’s action [in Kashmir] is unacceptable and the communications blockade must be lifted immediately, and the US government must be speak out boldly in support of international humanitarian live and in support of a UN backed peaceful resolution" @BernieSanders #isnacon pic.twitter.com/PrvgYzfqPs

Sanders, who is a Democratic presidential hopeful for the US Elections 2020, said he is ‘deeply concerned about the situation in Kashmir where the Indian government has revoked Kashmiri autonomy, cracked down on dissent and instituted a communications blackout’.

“The crackdown in the name of security is also denying the Kashmiri people access to medical care. Even many respected doctors in India have acknowledged that the Indian government-imposed restrictions on travel are threatening the life-saving care that patients need,” he said while addressing the 56th Convention of Islamic Society of North America (ISNA).

“The communications blockade must be lifted immediately and the United States government must speak out boldly in support of international humanitarian law and in support of a UN-backed peaceful resolution that respects the will of the Kashmiri people,” the senator stated.