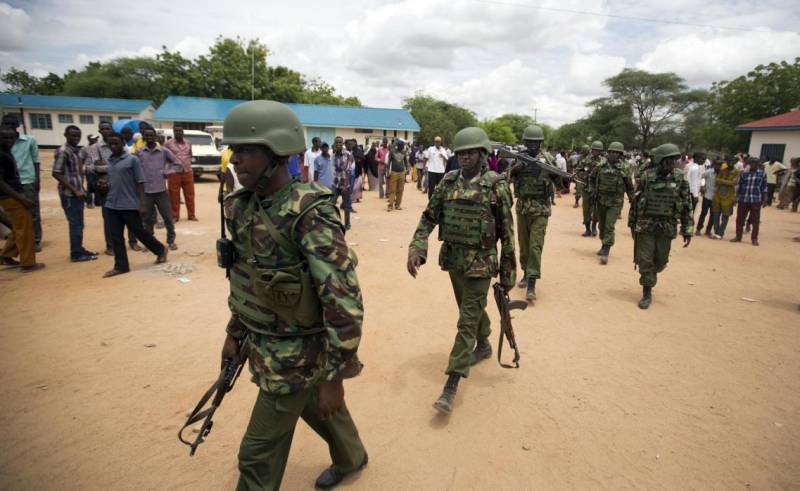 NAIROBI (Agencies) - The Kenyan air force has destroyed two al Shabaab camps in Somalia, it said on Monday, in the first major military response since the Islamist group massacred students at a Kenyan university last week.

Gunmen from the al Qaeda-aligned group killed 148 people on Thursday when they stormed the Garissa University College campus, some 200 km (120 miles) from the Somali border.

Jets pounded the camps in the Gedo region on the other side of the frontier on Sunday, Kenya Defence Forces spokesman David Obonyo said. The mission was part of efforts to stop fighters from those camps carrying out cross-border raids into Kenya.

"Our aerial images show that the camps were completely destroyed," he said, though cloud cover made it difficult to estimate the death toll.

Al Shabaab has killed more than 400 people on Kenyan soil in the last two years, including 67 during a siege at Nairobi's Westgate mall in 2013, piling political pressure on President Uhuru Kenyatta that intensified with last week's killings.

Kenya has struggled to stop the flow of militants and weapons across its porous 700-km border with Somalia, and the violence has also damaged the economy by scaring away tourists and investors.

Sheikh Abdiasis Abu Musab, al Shabaab's military operations spokesman, told Reuters that none of its camps were damaged in Sunday's raid, and that the fighter jets had instead struck farmland.

"Kenya has not targeted any of our bases," he said.

The rural Gedo region of Somalia is difficult to reach and reports about the raid could not be verified independently.

One of the four gunmen in the Garissa attack was the son of a Kenyan government official from Mandera county, which borders Gedo. Abdirahim Abdullahi, an ethnic Somali, was reported missing by his father after he crossed into Somalia to join al Shabaab. All four gunmen were killed in the siege.

Kenyatta said on Saturday the planners and financiers of Islamist attacks were "deeply embedded" within Kenyan society and urged the Muslim community to do more to root out radicalization.

A government source on Monday said governors, members of parliament and security officials from regions bordering Somalia would compile a list of people suspected to have joined al Shabaab or been radicalized by Islamists.

"The message is very clear: we have to deal with this problem once and for all," said the official, adding that regional governors discussed the idea with Kenyatta on Monday.

Garissa was the most deadly attack on Kenyan soil since al Qaeda bombed the U.S. embassy in Nairobi in 1998, killing more than 200 people and wounding thousands.

'PULL OUT OF SOMALIA'

In the capital Nairobi, where local media have become increasingly critical of what they call a bungled security response to the Garissa attack, dozens of grieving families are still trying to identify bodies at the city's mortuary.

"(The security services) waited too long and the terrorists had so much time to kill our kids," said Isaac Mutisya, whose 23-year-old daughter Risper Mutindi Kasyoka is among the dead.

Opposition leader Raila Odinga, who was prime minister when Kenya sent troops into Somalia in 2011 to battle al Shabaab, said the government should start thinking about pulling out, just as the United States withdrew troops after 18 soldiers were killed in the 1993 Black Hawk Down incident in Mogadishu.

"The U.S. used to have many soldiers in Somalia but it recalled them. Kenya should also remove its military officers from Somalia," Odinga said on Sunday, according to comments in Monday's edition of Kenya's Standard newspaper.

Kenyatta's spokesman Manoah Esipisu said Kenya had no plan to pull out: "When we were attacked (by al Qaeda) in 1998, we were not in Somalia. So the idea that pulling out of Somalia will diminish our vulnerability to attacks is complete nonsense."

Kenyan troops, who are fighting al Shabaab as part of a U.N.-backed African Union peacekeeping mission, have wrested swathes of territory from the Islamist group.

Western diplomats, however, say this loss of territory has not weakened al Shabaab's capacity to carry out one-off guerilla-style attacks in Somalia or abroad.