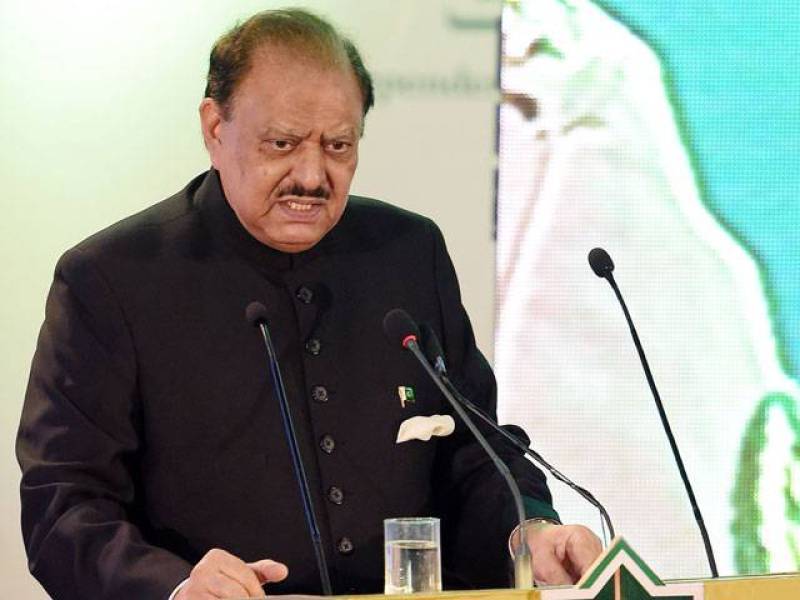 ISLAMABAD - President Mamnoon Hussain strongly condemned the ongoing violence against innocent Kashmiris by the Indian occupation forces on Friday and asserted that the Pakistani nation stood with their Kashmiri brothers in their just struggle.

Addressing the inauguration of the annual National Book Festival here at the Pakistan-China Centre, the President appealed to the international community to realize and play its part in putting an end to the gross human rights violations by the Indian forces declaring that Kashmir issue could only be resolved through implementation of the UN Security Council resolutions.

The President appreciated the holding of the annual book exhibition, organized by the National Book Foundation (NBF) and said the endeavour to inculcate the habit of reading amongst the young and old was getting a good response.

LAHORE - People from all walks of life in Pakistan are observing Kashmir Solidarity Day today (Friday) to express their ...

President Mamnoon Hussain said there were a number of universities and institutes of higher studies that were conducting research and development besides imparting quality education in all areas of the country.

He, however, said that the impact and reach of these organizations could increase significantly if their mode of education was in the national language.

President Mamnoon Hussain said a lot of many bright students of Pakistan could not make it up to the top in education, only because the mode of teaching was not in the Urdu language.

He called for translating books on health, medicine, engineering, sciences and arts in Urdu to encourage and instil amongst the people the habit of reading.

The President said the National Book Foundation needed to focus on the welfare of the writers and publishers and served as an example for others.

President Mamnoon said the human minds were fertile enough to absorb huge amounts of information and said if they were fed positive information, they turn out to be better human beings who served the humanity and made the society a better place to live.

"In a world full of chaos, confusion, lawlessness and uncertainty, there was a need to generate positivity through good literary works, stimulate minds and encourage more learning," highlighted the president.

Earlier, the President inaugurated the four-day National Book Festival and went around the exhibition in which over 29 bookstalls have been set up by 110 private publishers. Books on literature, science, technology, current affairs, history, philosophy, travelogue, religion have been put on display.