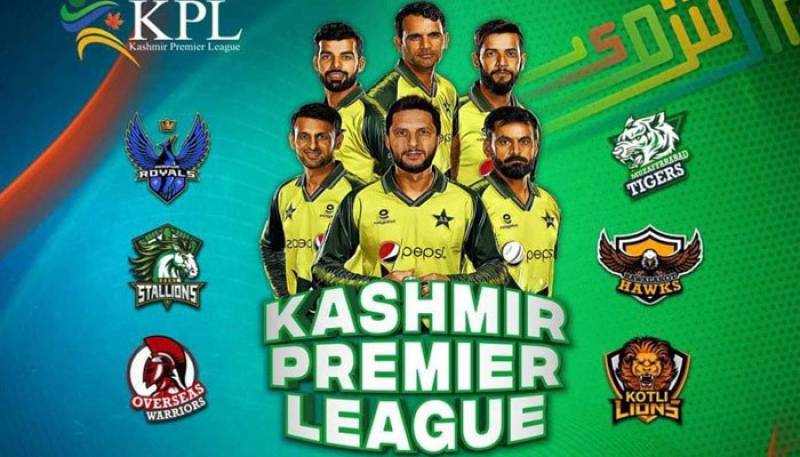 The first edition of the Kashmir Premier League (KPL) will start tonight (Friday).

The first match will be played between Rawalakot Hawks and Mirpur Royals at the Muzaffarabad Cricket Ground, Azad Kashmir. The match will begin at 8:30pm.

The official logo titled, “Khelo Azadi Say” was also unveiled at the launching ceremony. The league consists of six teams. Five teams representing the cities in the Azad Kashmir region of Pakistan and one team representing overseas Kashmiris.

Teams play in a double round-robin format with the top four teams qualifying for the playoffs. All matches will be aired on PTV Sports and Geo Super.

The Mirpur Royals will play under the captaincy of Shoaib Malik, Bagh Stallions will strive for the trophy with skipper Shadab Khan, while the Muzaffarabad Tigers will fight under Muhammed Hafeez. Imad Wasim is all set to lead the Overseas Warriors, with Fakhar Zaman leading Kotli Lions and Afridi leading the Rawalakot Hawks.

The Mirpur Royals is based in Mirpur city situated in the Azad Kashmir. The team’s home ground is Mirpur Cricket Stadium. Shoaib Malik is leading the side with head coach Inzamamul Haq.

The Rawalakot Hawks is based in Rawalakot city situated in Azad Kashmir. The team’s home ground is Rawalakot Cricket Stadium. Shahid Afridi is team captain and head coach is Arshad Khan.

The authorities have placed all players, management and support staff members in the league’s bio-secure bubble as part of a safety protocol to protect them from the coronavirus.

The decision to place players, management and support staff members has become a necessary move considering the outbreak of the coronavirus over the past year or so.

A bio-secure bubble or a bubble is a new terminology that emerged in the backdrop of the Covid-19 pandemic that is rampaging around the globe since December 2019. It is a hosting arrangement for sporting events. It requires events to be held at a centralized site.

It usually involves quarantining strictly and following safety protocols to curb the chance of infections spreading among those in the bubble.

The KPL chief also announced that a vaccination centre will be set up at the game venue with the help of the local government. Spectators will also have to follow basic Covid-19 SOPs as long as they are on the ground, said Arif Malik.