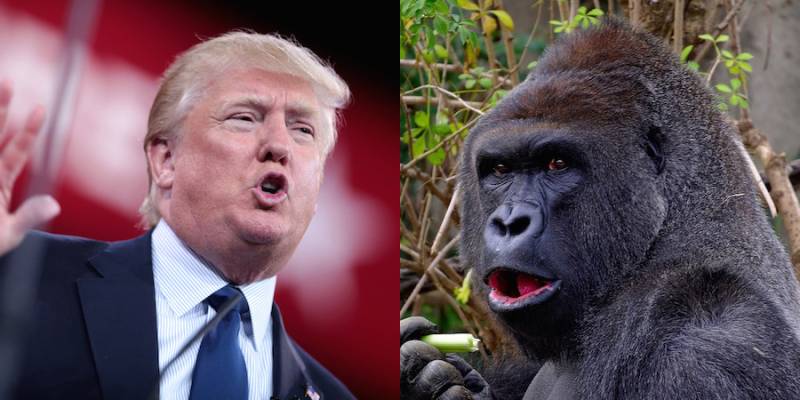 NEW YORK - The internet fell for an outlandish joke on Twitter that claimed White House staffers created a TV channel consisting of nothing but gorillas fighting for President Donald Trump’s amusement.

Just before the release of ‘Fire and Fury: Inside the Trump White House,’ a tell-all book about Trump’s first year in office, @pixelatedboat, a parody Twitter account posted a fake excerpt from the book that fooled a lot of people.

Wow, this extract from Wolff’s book is a shocking insight into Trump’s mind: pic.twitter.com/1ZecclggSa

The Thursday post claims that during his first night in the White House, Trump complained his television was broken because it didn’t have “the gorilla channel.”

“Trump seemed to be under the impression that a TV channel existed that screened nothing but gorilla-based content, 24 hours a day,” the parody account tweeted.

In order to appease the president, the post said White House staffers edited footage from several documentaries to create a “makeshift” gorilla channel. The staffers were then able to broadcast the channel into Trump’s bedroom TV from “a hastily-constructed transmission tower on the South Lawn.”

However, Trump was “bored” with their efforts, complaining the gorillas were not fighting enough. So, the staff added more footage of gorillas fighting each other until the president was “satisfied.”

The post quotes a fake “insider” who said Trump spends 17 hours a day, four inches from the screen. “The way you hit that other gorilla was good,” Trump tells the gorillas on screen.

“I think he thinks the gorillas can hear him,” the fake source added.

The post was retweeted more than 17,000 times by Friday and many users seemed to actually believe the story.

That's some scary sh^t there.He's living in another state of mind.

I thought it was real for a minute https://t.co/hfh76ibMiz

Many cited the fake excerpt as a reason not to take Wolff’s new book seriously.

he deleted it, but: pic.twitter.com/2Rm8m6lZtJ

Eric Garland wonders why everyone dunks on him and then he goes and does this pic.twitter.com/JOUxVEBZ7p

While some were fooled, most tweeters immediately understood the story was a joke.

Everyone loves the Gorilla Channel, a channel in which gorillas do nothing but fight!
*five minutes later*
We regret to inform you that the possible existence of the Gorilla Channel has revealed uncomfortable things about the American electorate.

The Gorilla Channel Test: If enough people find it plausible that the president has spent multiple hours hunched in front of a television, shouting instructions to gorilla fight combatants, maybe it's time for a new president.

I propose this amendment to the constitution.

In order to clear up any confusion that his tweet was a parody, the original poster even changed the display name of his Twitter page to “the gorilla channel thing is a joke.” However, he did not think it would actually help.

Wonder if this new display name will help. Probably not.