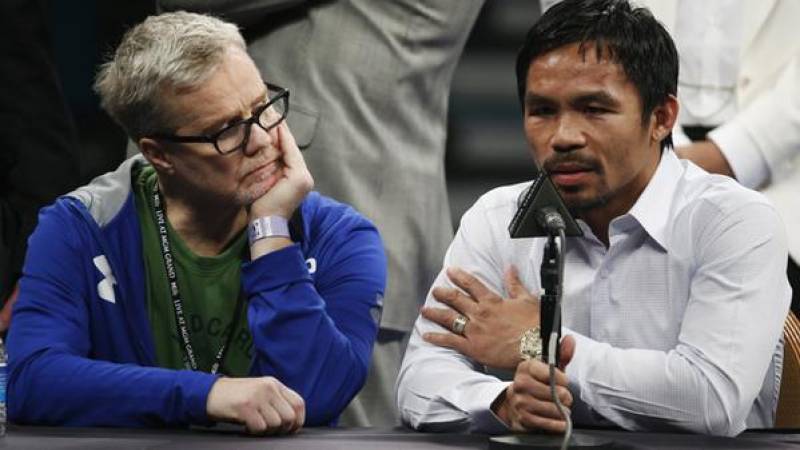 LAS VEGAS (Web Desk) - Manny Pacquiao is the subject of a lawsuit in Nevada after being accused of lying over a shoulder injury sustained before his fight against Floyd Mayweather in Las Vegas.

The Nevada Athletic Commission (NAC) says Pacquiao, 36, did not declare the injury on a pre-fight questionnaire.

But the fighter says he was transparent and a treatment plan had been agreed.

They have opened lawsuits just hours after the NAC accused the fighter of being dishonest. If the Filipino is found guilty of that charge, the penalty for perjury could be a jail sentence of between one and four years, and a fine of up to $5,000 (£3,305).

Pacquiao blamed his points defeat on the injury - claiming it stopped him using his right hand - but a joint statement released by Team Pacquiao and his promoters Top Rank said the United States Anti-Doping Agency (Usada) had been notified during the fighter's training camp and on fight night.

They added that a Usada doctor sanctioned the use of a non-steroidal anti-inflammatory on fight night, but the NAC did not allow it to be administered because they were "unaware" of the shoulder injury.

The statement added: "This was disappointing since Team Pacquiao had disclosed the injury and treatment to Usada, who approved the treatments and Manny had listed the medication on his pre-fight medical form."

The NAC says the Pacquiao camp were not "obligated" to disclose the injury, but their executive director Bob Bennett said: "It's not just the fact he didn't fill out the question completely, it's that he wasn't honest.

"Two hours before the fight they wanted a shot that's a painkiller, in essence. That put us in a very precarious position."

The form Pacquiao signed asked if he had "any injuries to his shoulders, elbows, or hands that needed evaluation or examination".

The legal disclaimer states that the signatory "swears, under penalty of perjury, that the above information is true and correct".

Surgeon Neal ElAttrache told ESPN the fighter has a "significant tear" in his rotator cuff and added the injury was likely to sideline him for between nine and 12 months.

Mayweather, 38, scored a unanimous points-victory in the four-belt unification bout at the MGM Grand Garden Arena, the win extending the American's unbeaten record as a professional to 48 fights.

Pacquiao's surgery means any rematch is unlikely, with Mayweather insisting he will retire in September after one more fight.