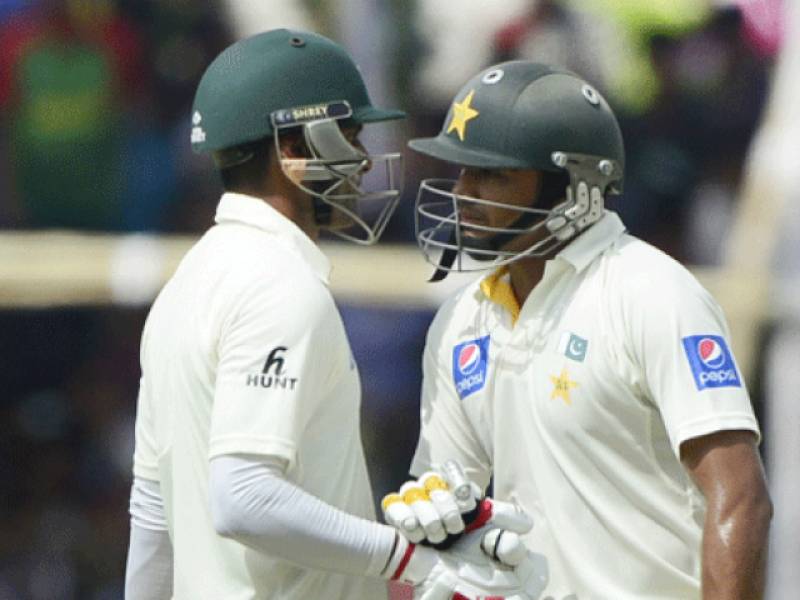 DHAKA (Staff Report) - Younis Khan and Azhar Ali completed their centuries to lead Pakistan pass the 250-run mark after tea on day one in the second Test match against Bangladesh in Mirpur.

Younis Khan smacked Shakib Al Hasan for a six in the 70th over to bring up his 29th Test ton in style. Meanwhile, Azhar resorted to a boundary off Taijul Islam in the 72nd over to complete his century on 212 balls.

Seamer Mohammad Shahid and left-arm spinner Taijul Islam struck early as Bangladesh reduced Pakistan to 70-2 by lunch on the first day of the second Test in Dhaka on Wednesday.

Shahid justified Bangladesh captain Mushfiqur Rahim’s decision to bowl first at the Sher-e-Bangla stadium when he forced Mohammad Hafeez to edge a catch in the fourth over.

Hafeez, who hit a double-century in the drawn first Test in Khulna, made just eight as Rahim completed the catch behind the stumps.

It could soon have been 38-2 when Azhar Ali edged Shahid to third slip, but TV umpire Ranmore Martinesz reprieved the batsman by declaring a no-ball.

Azhar, who was then on 18, moved to 36 by the break. Younis Khan was the other batsman at the crease on one.

Bangladesh suffered a blow when seamer Shahadat Hossain was ruled out for the rest of the Test after sending down just two deliveries in the first over of the match.

Shahadat, who replaced the injured Rubel Hossain for the decisive Test, collapsed on his follow through and hobbled off the field.

Shahadat returned after the drinks break, and even though he did not bowl for the rest of the session, he took a catch in the deep to dismiss Sami Aslam.

However, Shahadat broke down again while training during the lunch break and had to be lifted away on a stretcher.

Chief selector Farooq Ahmed said the 28-year-old seamer had injured his right knee and will take no further part in the match.

Taijul removed Aslam for 19, forcing him to pull a short ball to deep mid-wicket.

Both sides made one change each from the first Test, with Bangladesh replacing Rubel with Shahadat and Pakistan dropping spinner Zulfiqar Babar to play an additional seamer in Imran Khan.

Pakistan are looking for their first win at the end of the month-long tour where they were routed 3-0 in the one-day series and also lost a Twenty20 international for the first time against Bangladesh.

Bangladesh captain Mushfiqur Rahim won the toss and sent Pakistan in to bat in the second and final Test at the Sher-e-Bangla stadium in Dhaka on Wednesday.

Both sides made one change each from the drawn first Test in Khulna, with Bangladesh replacing the injured Rubel Hossain with Shahadat Hossain and Pakistan dropping spinner Zulfiqar Babar to play an additional seamer in Imran Khan.

Pakistan are looking for their first win at the end of the month-long tour where they were routed 3-0 in the one-day series and also lost a Twenty20 international for the first time against Bangladesh.