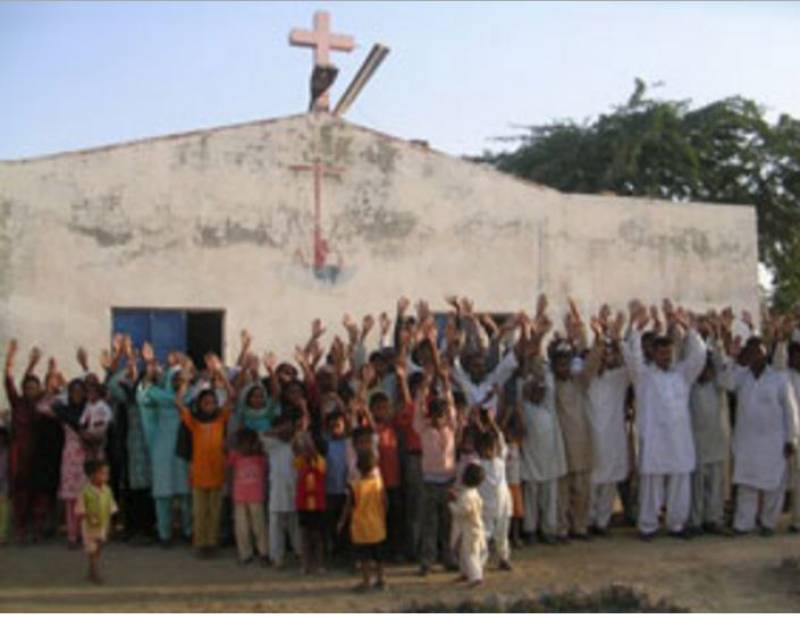 GOJRA (Staff Report) - In a bid to promote religious harmony in Pakistan, Muslim farmers have joined hands with Christians to build a demolished church in Khalsabad village near  Gojra in Toba Tek Singh district.

Gojra made the news in 2009 when houses of Christians were attacked by a Muslim mob on accusations of blasphemy. As many as ten Christians were killed in the tragedy including seven who were burnt alive in their houses. Four churches located in nearby villages were also destroyed by the mob.

However, some six years after the Gojra incident, Muslims of the same area have decided to support their Christian fellows in the construction of a mud chapel, which was swept away during the last monsoon rains season.

Dilawar Hussain, who is a Muslim shopkeeper in the same village, also participated in the building of the church. He donated Rs10,000 for construction of the church, after he came to know about the project at a community meeting in the beginning of April.

Hussain says that church is also a house of Allah, the same God that Muslims believe in, and he is proud of the efforts to promote religious harmony in the area.

Other Muslim residents of the village also contributed to the chapel construction according to their economic condition. A local businessman donated the highest amount, Rs30,000, while another Muslim farmer gave Rs2,000 for the project.

Father Aftab James Paul, who is serving as assistant parish priest at the St Fidelis Church in Khushpur and is responsible to manage pastoral outreach in 56 villages including Khalsabad, sums up the coordination of Muslims and Christians saying, "This is what life is about."

He says that the condemnable acts of the few should not be blamed on all the followers of a religion, while the message of love must be spread among society.

He said this is not the first time when  Muslims have helped Christians to build a church, as a Catholic prayer place was also constructed in Gojra tehsil in 2005 with the help of Muslims.