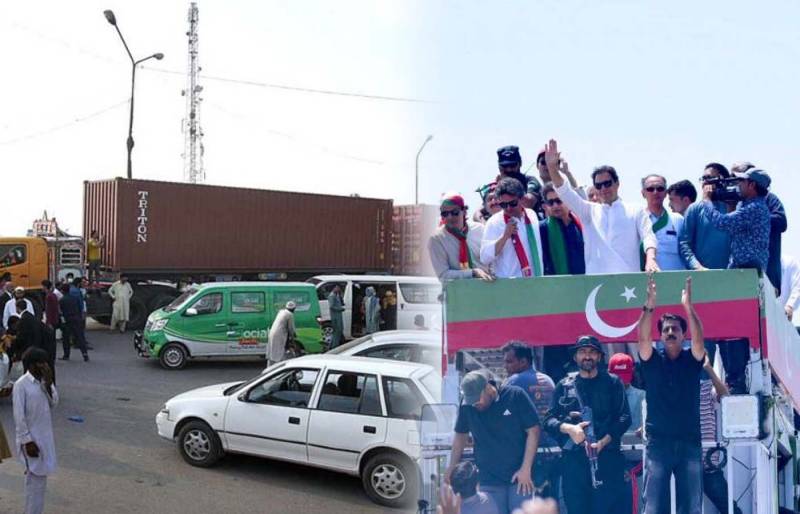 ISLAMABAD – Law enforcement agencies and federal administration have chalked out a comprehensive strategy to deal with PTI long-march as defiant leader Imran Khan plans to lead demonstrations in the capital.

Reports in local media show capital authorities placing more shipping containers at the Faizabad intersection. The capital administration have collected more than 1,100 containers as PTI planned to move the capital in another bid to force PM Shehbaz to step down and call early polls.

As more containers were placed at Faizabad, social media users came up with hilarious ideas, calling the place ‘a dry port’.

The politics of containers is back. Inhabitants of Islamabad bear yourselves for yet another siege of the capital. pic.twitter.com/FD6SJBMsfO

Meanwhile, the ruling alliance mulled a new strategy under Prime Minister Shehbaz Sharif and decided that no one would be allowed to stage demonstrations in the federal capital.

More than 25,000 personnel including police, will be deployed in the capital who will use tear gas shells to disrupt the agitators, reports suggest.

Earlier, the ousted premier Imran Khan visited Peshawar and Lahore and called on the provincial administration to bring masses to the capital.

Punjab Home Minister Hashim Dogar also responded to rumors of joining the PTI long march, saying the provincial government will not become a part of the long march as it is a political issue.

The former ruling party decided to take on the capital, months after calling off a protest march against the Sharif-led government.

The previous march saw clashes between police and Pakistan Tehreek-e-Insaf party's supporters and the later army was deployed at the red zone.