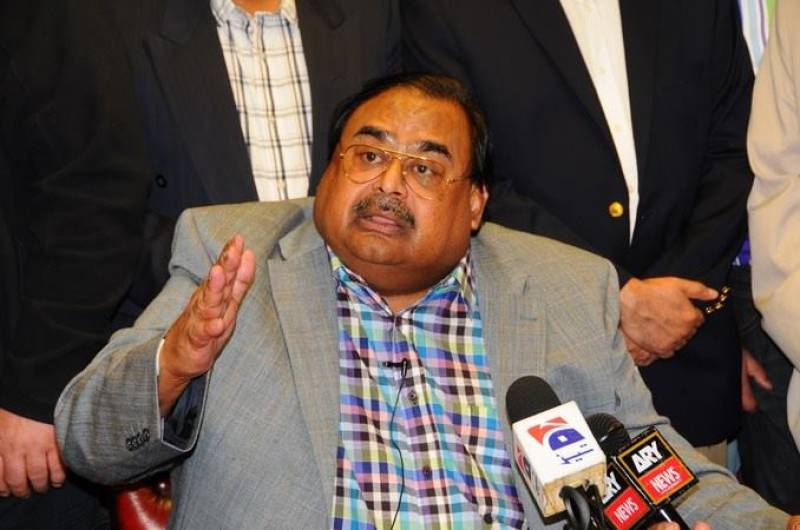 LONDON - Muttahida Qaumi Movement (MQM-London) leader Altaf Hussain is likely to be booked in incitement to violence and terrorism cases as the British authorities have enlisted Pakistan’s help in this regard.

According to a document available with leading Pakistan daily, Britain’s Crown Prosecution Service (CPS) is focusing on violence associated with speeches given by Hussain on March 11, 2015 and Aug 22, 2016, the latter one led to the split of the party as well.

The charges being considered by the British authorities range from encouraging violent disorder, inciting others to commit terrorism outside England and Wales to encouragement of terrorism.

Other charges could include intentionally encouraging or assisting an offence. The various offences fall under the Terrorism Act, the Serious Crime Act and the Public Order Act, Dawn News reported.

What could trigger panic in ranks of MQM-London is the fact that a document has been formally forwarded to Islamabad on Aug 8 that recounts how, after the Aug 22, 2016 speech, some of Hussain’s supporters went on the rampage in Karachi.

“Towards the end of the speech, he seemed to be encouraging the audience to go and attack local media stations,” the document says.

According to the report, the protesters attacked the office of a local news channel, ARY News.

“As a result of the violence, one person was killed and several others were injured.” The document names the deceased as Arif Saeed.

According to the report, the CPS document also refers to a less well-known speech made on March 11, 2015 following the Rangers’ raid on Nine Zero.

After that raid, the document says, Hussain gave an interview to Pakistani channel. Reports about the interview indicate that the MQM founder denounced the raid, and said the death of an MQM activist, Waqas Shah, during the raid deeply upset him besides accusing the Rangers of planting the ammunition they seized at MQM headquarter.

The report said that the most likely explanation of the CPS’s interest in the otherwise ignored March 11 speech is that nine days later, the Pakistani authorities lodged a complaint to the british authorities requesting that Hussain be investigated for his comments.

The British document observes that: “The Rangers have denied that he was killed by them,” and goes on to request: “a statement and any further details from any pathologist regarding the post mortem or cause of death in relation to Mr Waqas Shah.”

The MQM has claimed that, in fact, Waqas Shah was killed by the Rangers.

The report says that the CPS document appeared confused as to the sequence of events on March 11. At one point it states that Waqas Shah was killed during the raid on Nine Zero but later it says the death of Waqas Shah followed Hussain’s speech. The distinction would seem crucial to any attempt to prove incitement, the report claimed.

Another twist in the story emerged earlier this month when an MQM worker, Syed Asif Ali, was sentenced to death for the murder of Waqas Shah.

According to the report, the current enquiry into the speeches called ‘Operation Demerit’  was established by the Metropolitan Police Counter Terrorism Command in February this year and brought together two separate units that were looking into possible hate crime offences. Initially Operation Demerit considered six of Altaf Hussain’s speeches but the CPS document indicates that it is now focusing on just two of them.

When asked about the progress of Operation Demerit, a spokesman for the Metropolitan Police confirmed the media outfit that an International Letter of Request has been sent to Pakistan and said that it is not yet clear how long it will take to decide whether or not to lay charges.

“A decision will be made in due course: no time limit has been set.” he added.

According to the media outlet, the CPS is requesting a significant amount of Pakistani assistance like providing copies of all the investigation files in relation to both speeches.

It is hoping to receive the Sindh Police files, details of the Sindh Counter Terrorism Division investigation files, the FIA files and the Sindh Rangers files. The CPS is also hoping to obtain copies of the speeches and any video of the aftermath that “may help identify criminal offences committed by Mr Hussain”.

The British government also wants details of any suspects arrested in relation to incidents following the two speeches and anything else Pakistan would consider useful to progress the cases in relation to possible incitement.

Pakistan has previously made attempts to link the MQM cases to the presence of Baloch separatists in London.

The current investigation into Hussain’s speeches is the only active British police enquiry into MQM-London and its leader as the British authorities have dropped two large-scale and long-running investigations into MQM-related matters.

The report quoted a source close to the investigation as having said that some British officials remain determined that the politics surrounding the various cases should not be allowed to obstruct justice.

It bears mentioning that the Aug 22 speech of MQM self exile-chief Altaf Hussain was condemned not only by his rivals but also by his fellows.

'Who says long live Pakistan…it’s down with Pakistan.' Altaf insinuated.

Later in the speech when he inquired — “So you are moving to ARY and Samaa [offices] from here…right?” — he received from the crowd a unanimous and loud reply in the affirmative.

“So you go to Samaa and ARY today and then refresh [yourself] tomorrow for the Rangers place. And tomorrow we would lock down the Sindh government building which is called Sindh Secretariat.” he had said.