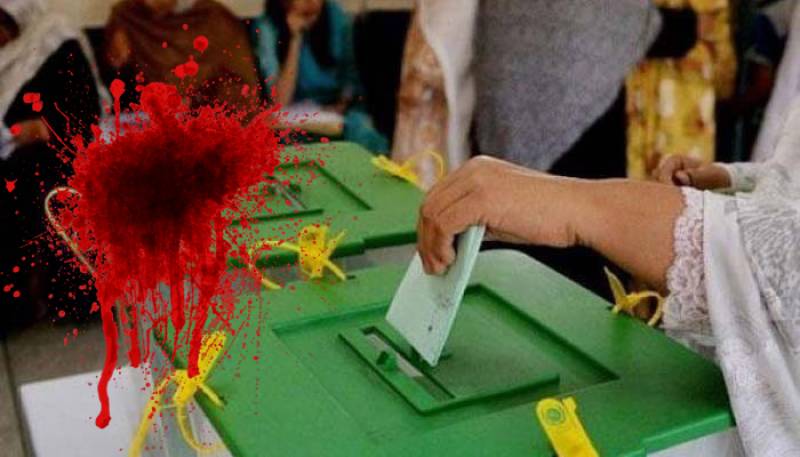 MUZAFFARABAD – At least two ruling party workers were shot dead in a scuffle with PPP activists at Mithi Jand polling station at Kotli’s LA-12 of Azad Jammu and Kashmir as polling for 45 seats of the AJK Legislative Assembly is underway.

The deceased members are identified as 40-year-old Zaheer Ahmed and 50-year-old Ramzan. A local cop while speaking with a media publication told that the clash erupted between PPP and PTI workers at the Mithi Jand polling station.

The deceased Ahmed died following the gunshot while the other Ramzan succumbed on the way to the hospital.

The general polling comes after weeks of a highly charged and divisive election campaign that saw politicians from three bigwigs hurl allegations at each other.

Meanwhile, voting in some polling stations of other constituencies was also temporarily suspended due to violence-related incidents.

MUZAFFARABAD – The Pakistan Tehreek-e-Insaf (PTI) emerged victorious in the 11th general elections of the Azad ...

The security of the region has been handed to the Pakistan Army in wake of ongoing polls. More than 44,000 security personnel are deployed at polling stations across the region as per Article 245 of the Constitution. The Pakistan Army troops will remain in the region till July 26

The government has declared 1,209 polling stations sensitive and 826 most sensitive. Control rooms will be established across the region at the district level to ensure a smooth flow of voting.

Earlier in 2016, PML-N bagged 31 seats in the last elections, PPP won three seats, while PTI won only two, and the Jammu and Kashmir Peoples Party won one seat.