Education budget: A quantum leap forward or an eye wash?

The much-awaited time of budget announcement is just round the corner. The general elections 2018 have provided the departing government an opportunity to present the budget before the usual time. All the concerned are anxious to see what federal and provincial allocations will bring for education sector this year. Will the promise of allocating four percent of GDP to education sector be fulfilled?

The Constitution of Islamic Republic of Pakistan lays down that “State shall be responsible for eradication of illiteracy and provision of free and compulsory education up to secondary level, within minimum possible time” (Article 37-B, 1973 Constitution of Pakistan)

The article 25A – Right to Education – of the Constitution says, “The State shall provide free and compulsory education to all children of the age of five to sixteen years in such manner as may be determined by law.”

Almost every day, the media shows a school in a far-flung area facilitating the animals of the powerful feudal lords, exposing the miserable and hapless picture of the education sector. Lack of government ownership, unpredictability of cash flow, ineffective spending and unreliable monitoring mechanisms all team up to destroy the education system of Pakistan.

Exhaustively discussed issues of access to education, provision of quality and infrastructure, retainability and appropriate budget allocation haven’t been overcome as of yet. After realizing the multi-dimensional challenges to the education sector in Pakistan, appropriate allocation of finances means much more than doubling the finances. For that matter, establishing an authentic monitoring mechanism of funds distribution and utilization coupled with its impact on education can help achieve the desired results.

Effective spending of funds is missing, and political patronizing and lack of expertise waste the money.  Allocating without a realistic monitoring process is another tragedy in our country.

In 2017, PKR 902.7 billion were allocated for education if we add federal and provincial allocations. This figure is for public sector, while private schools are run by the exorbitant fees paid by the parents. The greatest dilemma isn’t insufficient budget allocation but consistent underspending and corruption that undermines all efforts.

Are there any realistic and concrete plans for spending the added financial allocation which are thoroughly based on need analysis?  Until now, the extra allocation has vanished in the conduit of bureaucracy. Money should be spent after careful research during next year unlike previous years where almost the entire increase was added to teachers’ salaries, which are already approximately 80 percent of all the expenditure, and the rest remained unused. All the increased allocation will be used as it had been during previous years. Sindh has repeatedly spent all the increased allocation on teachers’ salaries which include underperforming and ghost teachers largely.

The question is: is building new schools part of government’s agenda or not? Access to education is the most essential right and need of every child of country. The amount spent on new schools it must be a part of education budget. On the other hand, stagnant minded powerful people have converted many public schools into stables where all the funds set aside for teachers’ salaries are used up utility bills. What are government’s plans about these occupied schools?

(i) Will it continue funding them?

(ii) If yes, than how will these schools work, as stables or real education institutions?

No doubt the money doesn’t answer all the questions unless spent efficiently but how much the education budget has been increased in past few years and if compared with inflation can it be called an increase or not.  There is no doubt that some raise in the allocation has been observed but this was either wasted or frittered away by the powerful corrupt elite. 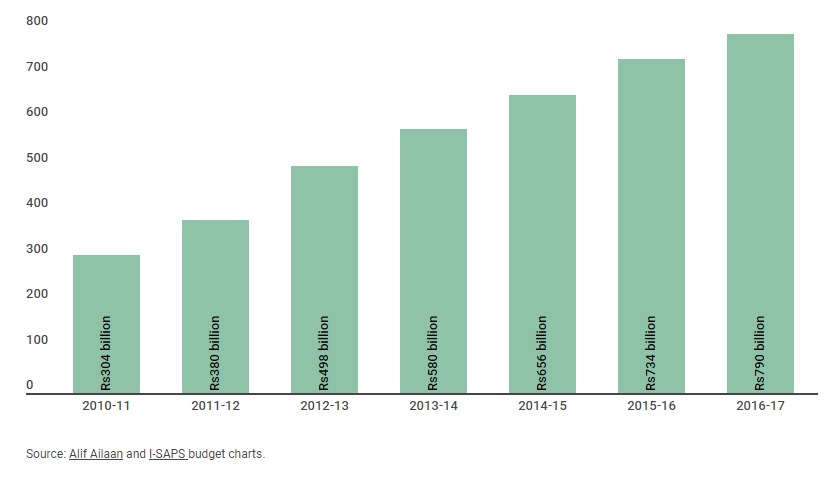 The 18th amendment made education a provincial responsibility, which was solely for the delegation of power to the authorities closer to the masses. It has worked a little bit as far as education sector is concerned but the impact is not even close to the expectations. Punjab for example allocated less finances to education in 2017 than in 2016. The issue of inefficient spending of allocation couldn’t be resolved even by provinces and the most shocking aspect is failure in spending the entire allocated budget. The result of unplanned increase in allocation is evident in Sindh where the major proportion contributed to the salaries of teachers.

Pakistan along other countries agreed to achieve the sustainable development goal 4. If Pakistan obtains the target of allocating 4 percent of GDP on education this year, it’ll attract the support of entire developed world. Though an increase to 4 percent seems difficult, but even if the goal is somehow accomplished, the question remains: where would the funds be spent?

Engineer Muhammad Baligh-ur-Rehman – Minister of State, Federal Education and Professional Training- admitted in the latest Pakistan education statistics report published in February 2017 that “Unfortunately due the successive changes in governments, lack of policy continuity, low budget size and allocation for education, we were not able to achieve MDGs. Education is essential for the success of all Sustainable Development Goals (SDGs) and therefore the heart of 2030 Agenda for Sustainable Development.”

Government must set priorities for the next five years to stand at the pinnacle of literacy level. These priorities should be centred around:

The oft-repeated promises of increased allocation of funds can be fulfilled by the government this year. This will be a quantum leap forward in education sector and if it’s used efficiently, the result will put our country on the right track.