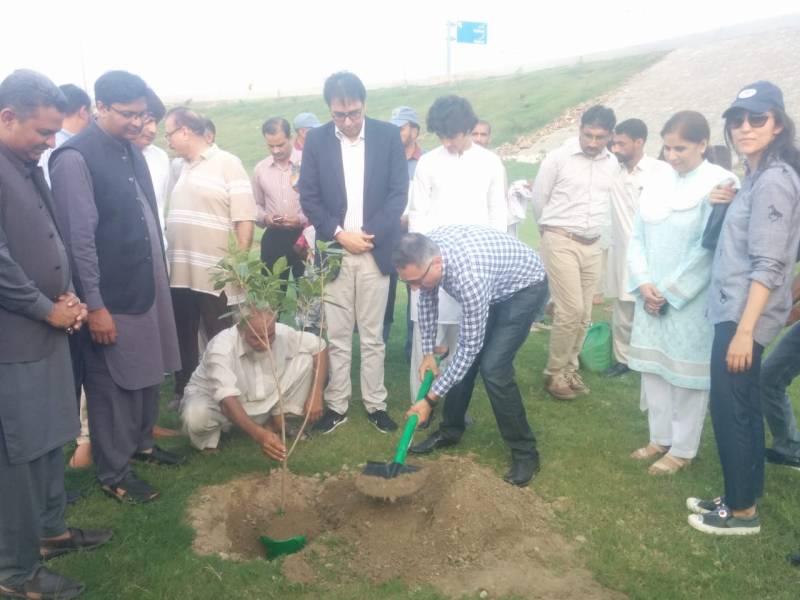 LAHORE - WWF-Pakistan and Akhuwat Foundation, in collaboration with other partners including Parks and Horticulture Authority, Lahore Ring Road Authority, and Afforestation Lahore, initiated a plantation drive under the Lahore Commissioner's urban afforestation initiative, as part of the government's Clean and Green Pakistan initiative.

Under this plantation drive, a total of 5,000 indigenous tree saplings will be planted in different locations in the city. Lahore, once known as the city of gardens, has rapidly lost urban green spaces to accommodate the swelling population. Such plantation drives will maintain the groundwater table, improve air quality and mitigate the adverse impacts of climate change. The drive was organized at Bulleh Shah Interchange, Lahore Ring Road where approximately 300 saplings of native trees were planted.

In burgeoning cities like Lahore, lack of green belts and increased concrete cover has led to elevated temperatures in cities. Furthermore, green patches in the cities are replaced by new developmental projects and housing colonies. But the subsequent

cutting of trees not only escalates greenhouse gas (GHGs) emissions but increases temperature and vulnerability to extreme weather events. Since trees are carbon sinks it's important to plant native species for better absorption of GHGs. Native plants have the ability to reduce the amount of heat produced by the anthropogenic activities, thus lowering temperatures.

Speaking on the occasion, Hammad Naqi Khan, Director General, WWF-Pakistan said, “There is an urgent need to connect people to nature and to educate them about our shared responsibility to build a sustainable future. Pakistan has the highest annual deforestation rate in Asia and forest cover is less than 2% of the total land. There is an urgent need to initiate massive plantation drives in and near metropolitan cities to reduce the adverse impacts of climate change.” He also added that although Pakistan is not contributing much to climate change it ranks among the top ten most vulnerable countries and is exposed to extreme weather events, droughts, floods and heatwaves. He emphasized that every individual needs to take part in plantation drives to make our cities more liveable.

Asif Bilal Lodhi, Commissioner Lahore shared, “The current plantation drive is a great initiative that will help improve decreasing tree cover in the city. It important that the relevant organizations and passionate citizens should come forward and extend their support. The government will make all possible efforts to support such initiatives in future as well.”  Dr Amjad Saqib, Chairman/ Founder, Akhuwat Foundation also stressed on the need to upscale similar afforestation initiatives.

Under the initiative, a total of 13 parks have been identified in Lahore to plant indigenous trees which will promote canopy cover of parks. These local trees include arjun, bakain (chinaberry), sukh chain (Indian beach) and kachnar (orchid). These all are very good native trees which could be promoted.

The plantation drive was carried out with the financial support of Akhuwat Foundation.