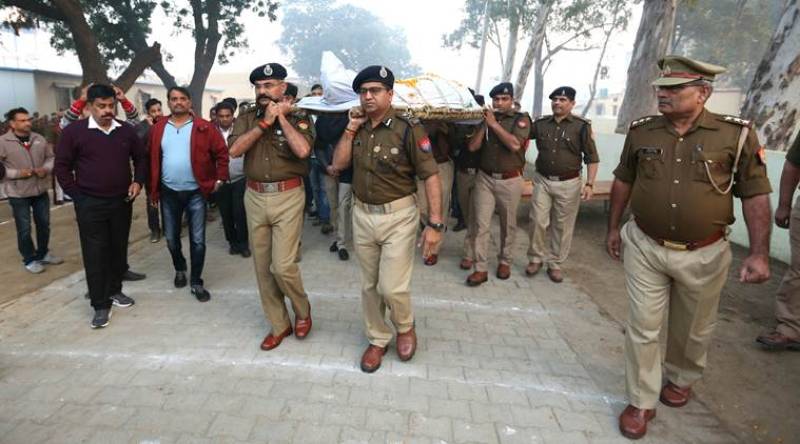 BULANDSHAHR - In the follow-up of investigations into the killing of an Indian policeman amid mob violence, a soldier has emerged as a key suspect in the case.

The mob violence took place in Uttar Pradesh's Bulandshahr on Monday after a cow slaughter incident was brought to the notice of police by a baying crowd, however, when the law enforcers tried to appeal to the mob's logic, it went out of control following which shots were fired.

As investigations into the incidents were launched soon afterwards the violence, sources say Jeetu Fauji, an army jawan posted in Srinagar, is suspected to have fired the shot that killed Inspector Subodh Kumar Singh.

Two police teams have been sent to Jammu and Kashmir to track down Jeetu Fauji, who is seen in various videos of the mob violence in Bulandshahr.

Three persons have been arrested in connection with the case regarding alleged cow slaughter which transpired into a murder case.

As per the details by Indian media, Inspector Subodh Kumar Singh and his team had gone to the village to tackle the violence when they came under attack.

NEW DELHI - Amid tall claims of rising secularism in India, two kids were summoned by the police in Uttar Pradesh’s ...

In a video, a wild mob is seen chasing the policemen and shouting: "Maaro, take his gun!" Inspector Singh was assaulted with a sharp weapon and then shot in the head.

In one of the mobile videos, the suspect Jeetu Fauji is seen in front of the police officer moments before he [Subodh Kumar Singh] was killed; the accused went back to Jammu and Kashmir the same evening.

Jeetu's mother told Indian media that the police vandalised their home in search for the soldier; she claimed that her son was in Kargil.

Disproving claims that Singh was behind the killing, her mother said if he is the culprit, then he deserves to be punished.

A senior officer investigating also media that it is too soon to say conclusively that Jeetu Fauji is the murderer of inspector Singh.

The case is basically regarding cow violence as a carcass was found of a cow - which some say was days old and others say was nowhere - however, it turned into a murder case.

Two minors have also faced a probe by the police as seven Muslims alleged to have been involved in cow slaughter were interrogated by the police.

The summoning of juveniles by the police on top of flimsy grounds about the carcass and ignoring the mob violence lays bare the ‘secularism’ and justice system in Narendra Modi’s land.