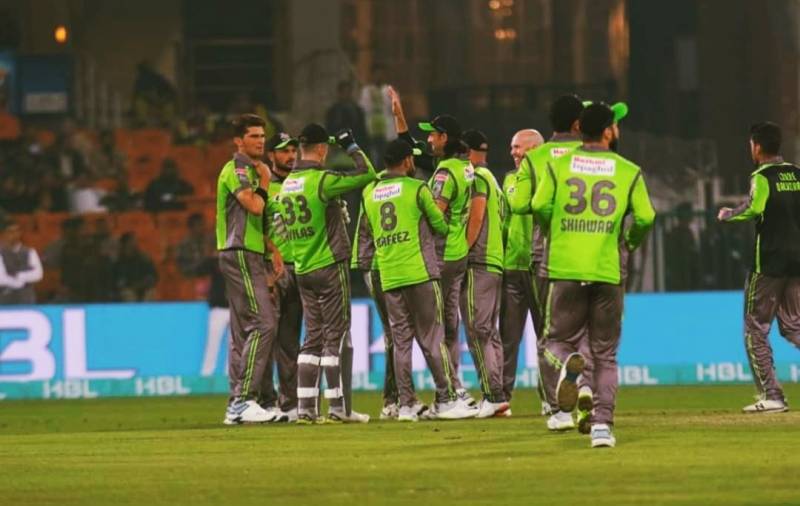 Chasing a meager total of 98 runs posted by Quetta, Muhammad Hafeez (39) and Ben Dunk (30) produced an unbroken partnership of 68 runs in 41 balls for the third wicket to overhaul the target set by Quetta Gladiators after two early wickets within the power play. Fakhar Zaman (20) and Sohail Akhter (5) got out cheaply in the run-chase by Muhammad Hafeez and Ben Dunk steered Qalandars’ boat to safety.

Earlier, Qalandars’ Samit Patel, who was a judged man of the match for his personal best bowling figures of 4 for 5 runs in the PSL, wove an unbreakable spin web over Quetta Gladiators batsmen who wilted under pressure after loss of early wickets and had lost 6 wickets for 21 runs in the power-play.

Samit Patel (4-5) and Farzan Raja (2-24) were almost unplayable for the Gladiators while Muhammad Hafeez also bowled an economical 3 overs for 15 runs to put the brakes on the Quetta Gladiators innings as they could never recover from the shock of early wickets.

Shaheen Shah Afridi started to wreak havoc as he got rid of Shane Watson and Ahmed Shahzad in his first seven balls of the innings. Afridi returned with bowling figures of 2-15 in his quota of four overs. Salman Irshad also got one wicket in his only over in the match while Dilber Hussain remained wicket less in his 4 overs.

It was Sohail Khan who played a responsible innings of 32 (34) to ensure some respectability to the team total as no other batsmen except Muhammad Nawaz 10 (26) and leg-spinner Zahid Mehmood 19 (19) could enter double-figures in the match. 15 extra runs were third highest score in the Quetta Gladiators innings.

Sohail Khan, in the post-match press conference, accepted that Gladiators’ strategy to post 200 runs on the board was the reason behind so many early wickets, adding that no batsman tried to judge nature of the pitch as it helped the spinners and was not conducive to stroke-play in the early part of the match.

Like Lahore Qalandars spinners who proved too good to handle for the Quetta Gladiators batsmen on a spin friendly pitch, Muhammad Nawaz also troubled Lahore Qalandars openers and both Fakhar Zaman and Sohail Akhter, who had promoted himself in the batting order to open the innings, fell victims to the deceit of slow left arm orthodox bowler within the power-play. No other Gladiators bowler could trouble the Lahore batsmen in the run-chase.

Muhammad Hafeez, however, played a cautious innings alongside Ben Dunk to ensure the Qalandars did not face any hiccups and cruised past the target in the 12th over their innings.

The victory is the only the second win for Lahore Qalandars who languish at the bottom of the points table with 4 points from 6 matches while Gladiators are fifth placed with 6 points from their 8 matches in the HBL PSLV. Lahore Qalandars might look for victory in the remaining four matches to cherish any hopes of qualifying for the play-offs for the first time in tournament’s five year history.

Lahore Qalandars are due to play their next match against Karachi Kings at the same venue on March 8 (tomorrow). Karachi Kings are currently placed four with 7 points from 6 matches.

Earlier today, Peshawar Zalmi claimed a narrow seven-run win over Islamabad United under DLS method as the match was stopped due to rain. Both sides faced defeats in their previous games.