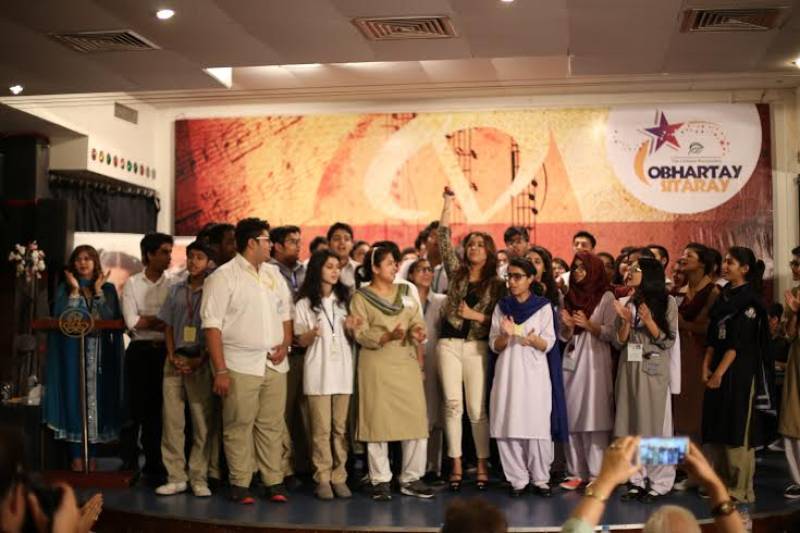 KARACHI (Staff Report) - Keeping up with its mission to ‘Educate Pakistan’, The Citizens Foundation (TCF) hosted the Teams’ Final of Obhartay Sitaray - 2015, for Seniors and College Level students at a local club.

Obhartay Sitaray is an inter-school fund raising, singing competition that provides students a chance to showcase their signing talent along with the opportunity to raise funds for education of the less-privileged children of TCF.

During the event around 65,000 students from 120+ schools campuses in Karachi participated in the fundraising efforts while over 550 students (250 teams) competed in the school level singing rounds.

For the Team’s Final, 24 voices in 8 teams from Primary, Secondary levels participated in the competition which was adjudicated by maestros like Khalid Anum, Afshan Ahmed and Tina Sani.

Speaking on the occasion, STCF Chairperson and Director TCF, Mrs. Nilofer Saeed said “TCF remains committed to the cause of education. It is a movement that needs ardent supporters because only education can pave way for a brighter and progressive Pakistan. As more and more supporters join us, each one marks a victory of education over illiteracy and deprivation.”

‘Obhartay Sitaray’ initiated in 2012, has now become a signature event of TCF in the course of 4 years. It is managed by a ladies volunteer group called Supporters of The Citizens Foundation (STCF). The group actively puts in time, effort, expertise and resources to arrange a vast array of fundraising events to support the cause of an educated and enlightened Pakistan.

The winning teams were:

The Grand Finale of the event will be held at 10th October, 2015 at the Marriott Hotel, Karachi.