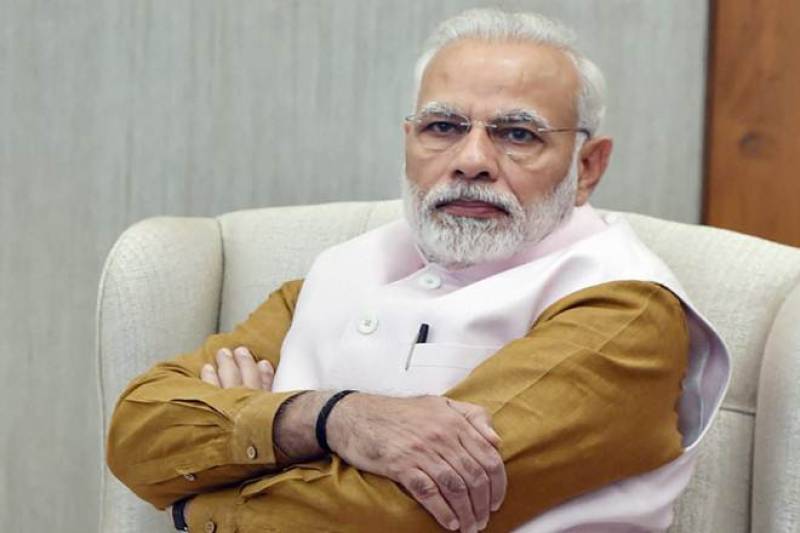 NEW DELHI - Indian Prime Minister,Narendra Modi termed the constitutional amendment regarding Kashmir 'historic', saying the Indian-occupied Kashmir was stripped of its autonomy to free it from 'terrorism and separatism'.

In an address to the nation on Thursday, the premier admitted that the decision has not been universally praised, but hastened to add that it was very natural in a democracy that some people are in favour of this decision and some have differences over it.

PM Modi said the central government is also responding to the debate on it as this is our democratic responsibility. Urging the critics to keep national interest paramount, he said that everyone must help the government give Jammu and Kashmir and Ladakh a new direction.

“I have full faith that the people of Jammu and Kashmir, after defeating separatism, will move forward with new hopes and aspirations,” he shared.

The Indian premier insinuated that the special status had not given anything other than terrorism, separatism, nepotism and big corruption.

Modi said he respected opposition politicians and prominent Kashmiris who have opposed the government's strong-arm tactics.

The BJP leader did not promise that prominent Kashmiri politicians would be released from detention, nor an end to the curfew imposed since the early hours of Monday.

However, he said he hoped Kashmiris would be able to celebrate the Islamic holiday of Eid (which begins on Sunday) without disruption.

“I want to assure my Jammu and Kashmir colleagues that slowly things will become normal and their problems will reduce,” he observed.

The Indian premier claimed that most of the Kashmiri brothers have welcomed the 'freedom from Article 370' - in what appears to be a weird claim considering the situation of the restive valley.

The premier assured the people of Kashmir that the union territory status of J&K will not be permanent, adding that the decision to keep J&K under Centre’s rule for a stipulated period of time was made after a lot of thought.

“The reason is important to understand. Ever since Governor Rule has been implemented there, good governance and development has been seen on the ground. The schemes that were once only on paper, have now been implemented," he said.

The Prime Minister said that elections in Jammu and Kashmir will be held soon assuring people of Kashmir that they will continue to choose their leaders like before and their CM like earlier, but the new paradigm change will improve the situation in the state.

SRINAGAR – Under a cover of ‘threats of militant attacks’, India is deploying over 35,000 additional paramilitary ...

He continued that very soon, in Jammu and Kashmir, all financial posts will be filled, creating employment opportunities for the youth.

The Indian premier said that benefits of central schemes will now extend to the region, adding that the decision fulfills the dreams of Sardar Patel, B.R Ambedkar and crores of patriots.