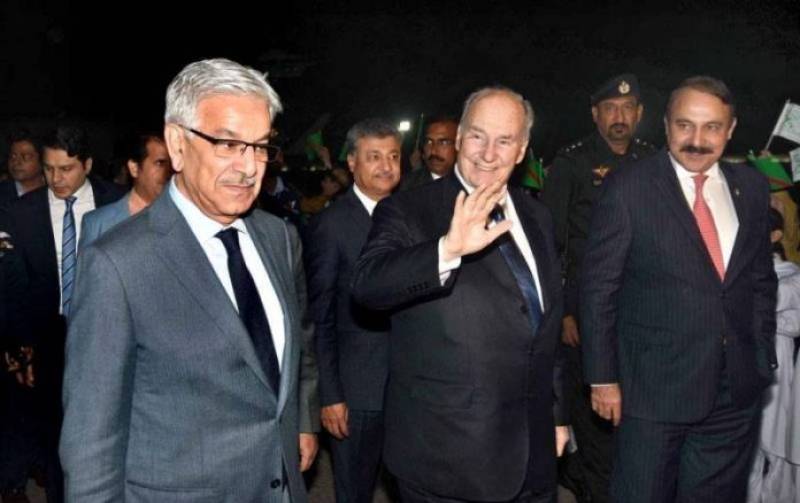 ISLAMABAD - The spiritual leader of the Ismailia community Prince Karim Aga Khan has arrived in Islamabad on a state visit at the invitation of the Government of Pakistan.

He was received at the Airport by Foreign Minister Khawaja Muhammad Asif and Minister of State for Capital Administration Dr Tariq Fazal Chaudhary.

The foreign minister appreciated his vision of promoting peace and interfaith harmony among Muslims and his role in the socio-economic development of economically disadvantaged communities in Pakistan and across the world.

Aga Khan conveyed his continued support to the government and people of Pakistan in economic and social development.

During his stay, the Aga Khan will meet the President Mamnoon Hussain at the Aiwan-e-Sadr where he will be given a guard of honour. He will also meet the Prime Minister, Shahid Khaqan Abbasi.

The Diamond Jubilee marks 60 years of his Imamat as the spiritual leader of the Shia Ismaili Muslim community. He acceded to the Ismaili Imamat on 11th July 1957, succeeding his grandfather, Sir Sultan Mahomed Shah Aga Khan, at the age of 20 as the 49th Imam of the Ismailis.

The Shia Imami Ismaili Muslims, generally known as the Ismailis, live in over 25 different countries, mainly in Central and South Asia, Africa and the Middle East, as well as in Europe, North America and Australia.

The Ismaili community sees the Jubilee as an opportunity to provide hope for the future for populations that may be marginalized or vulnerable. By strengthening development initiatives that will help people live better and improve opportunities for their families and children, the Ismaili community hopes to do everything possible to make the world a safer, more peaceful and stable place.